The Lion Guard Wiki
Register
Don't have an account?
Sign In
Advertisement
in: Songs, Songs sung by Scar, Season Three Songs,
and 3 more

When I Led the Guard

When I Led the Guard

When I Led the Guard is a song sung by Scar, explaining to Ushari how he got his scar.

The story of Scar is told in a flashback scene in which he meets a Strange Lion to lead him to a cobra to give him a scar just like him. This also explains how he lost the roar and destroyed his Lion Guard.

Scar:
When I was the Lion Guard's fiercest
I took most patrols on my own
So when I met this strange lion
I had no fear of being alone

I found his idea intriguing
Though the most powerful lion was me
But the strange lion was scheming
And had a friend I didn't see...

That's how I got my scar
When I led the Guard

That's when I became Scar
When I led the guard

If not for that miserable Simba
I'd have ruled Pride Rock to this day
But now, it is time
For Simba and Kion to pay 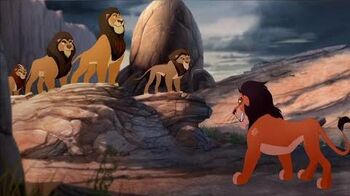