The Lion Guard Wiki
Register
Don't have an account?
Sign In
Advertisement
in: Groups, Pride Landers, Buffaloes,
and 3 more

The Lion Guard helps Vuruga Vuruga's Herd get away from a geyser.

They are mentioned by Kiara as the young princess explains to her friends, Tiifu and Zuri, that they are waiting for her to announce the start of the Royal Buffalo Wallow, and she doesn't want to be late for her royal duty.

When Kiara finally arrives, she greets Vuruga Vuruga, and after a bit of small talk, she announces the start of the Wallow. She and Vuruga Vuruga watch as the herd takes part in the event, where they wallow about in the mud with great joy.

Vuruga Vuruga's herd are seen being chased by Tsetse Flies.

Vuruga Vuruga's herd graze at night until Fuli approaches them, ordering them to move. But since the cheetah has been painted for the Ukumbusho, none of the buffalo recognize her. With the time of the essence, Fuli pretends to be a monster that comes out during a full moon to eat buffalo and suggests that they run. After some more snarling, the herd become frightened and leave.

When a drought hits the Pride Lands, Vuruga Vuruga's herd argue with Twiga's Herd over who should have the next drink, worried that they'll miss out entirely. Kion tries to calm them but is ultimately forced to seek advice from his father regarding the situation.

Later, having found a solution, the Lion Guard leads the herds through the Back Lands, where they are introduced to Dhahabu. The zebra welcomes them into her watering hole, on the condition that they frolic and romp. Vuruga Vuruga happily accepts her proposal and enjoys the water.

Vuruga Vurgua's herd can be seen stampeding towards Makuu's float. Kion warns Makuu to move higher ground, on a nearby cliff. Although everyone gets away from the herd, their stampeding causes a rockslide. Kion orders Fuli and Ono to calm down the buffaloes, while he, Beshte and Bunga assist Makuu's float. When a large rock collapses onto the tail of a crocodile, Makuu swiftly removes the rock to save him but is hit by another falling rock, injuring his foreleg. With the herd calmed down, Makuu comments that his float is safe.

Vuruga Vuruga's Herd can be seen during the song "The Faster I Go."

When Shujaa tries to make a path for the Lion Guard baboons jump on some members of the herd.

Vuruga Vuruga's Herd can be seen when Anga comes home from the Tree of Life. Vuruga Vuruga then listens to Rafiki announce the Battle of the Lion Guards.

Vuruga Vuruga serves as the leader of the herd. She is gracious to Kiara and is also very understanding. She appreciates an appropriate appearance. However, she is not above malice, as seen when siding with Twiga to set up Makuu. But she is also capable of forgiving those that she believes to have wronged her or her friends. 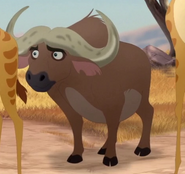