Unlikely Friends is book based on The Lion Guard. It was released on 3rd of May in 2016.[1] It is based on the episode Never Judge a Hyena by Its Spots.

When Kion gets separated from the rest of the Lion Guard, he gets lost in the Outlands! Kion has to be careful while he's in hyena territory because all hyenas are dangerous . . . or are they? Kion makes a new friend and learns an important lesson in this exciting Level Pre-1 reader!

Janja, Cheezi and Chungu are chasing some oryxes. The Lion Guard soon arrive and chase them out of the Pride Lands, with Kion choosing to follow them all to make certain they leave. As he passes over a log, he falls into a fast running stream. The Lion Guard soon chase after him on the other side, as Kion pulls himself to safety. Ono points out that Kion is on the side of the Outlands. Kion then tells him that it will be okay, and for everyone to meet him at Flat Ridge Rock.

However, the rest of the Guard do not know the way. Bunga asks a mongoose in the jungle and a rhino in the Watering Hole, but neither of them know the way. Suddenly, Ono spots Flat Ridge Rock nearby.

Meanwhile, Kion is still in the Outlands. A hyena named Jasiri approaches him and tells him that she knows the way to Flat Ridge rock, but Kion does not trust hyenas and chooses to ignore her directions. Jasiri reminds him that it's the wrong way, but Kion continues moving. He soon slips down a cliff, and winds up falling into some thorns. Jasiri approaches him with a hint of menace about her, but instead helps Kion get out of the thorn bush. Kion is surprised at her actions, but she replies that they're not so different. She agrees to go with Kion, and shows him Flat Ridge Rock in the distance.

However, Janja's clan arrives, causing Kion to return. He uses the Roar of the Elders to frighten the hyenas away, and they retreat. Jasiri is highly amused by their desperate escape.

The rest of the Guard arrive, and think that Kion is in trouble. Kion leaps in and informs them that Jasiri is his friend. Everyone then parts as friends.

Early cover
Add a photo to this gallery

Last page-Animal Facts page
Add a photo to this gallery 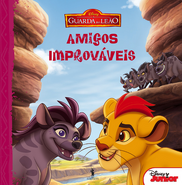 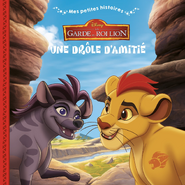 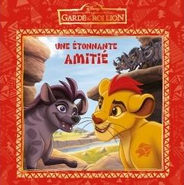 French v3
Add a photo to this gallery

Retrieved from "https://lionguard.fandom.com/wiki/Unlikely_Friends?oldid=166537"
Community content is available under CC-BY-SA unless otherwise noted.