watch 02:03
Wiki Targeted (Entertainment)
Do you like this video?
Play Sound

A new Little Golden Book starring Disney Junior’s The Lion Guard! This Little Golden Book retells an episode of the hit Disney Junior series The Lion Guard, in which the Pride Lands become overrun with termites! When Kion and the rest of the Guard get a late-night call that the hyenas are back, they rush into action to chase the predators away. But they accidentally chase away all the aardwolves, too — which look similar to hyenas. Now there are termites everywhere because the aardwolves aren’t around to eat them! Children ages 2 to 5 will love finding out how the Lion Guard brings the Circle of Life back into balance. The Lion Guard animated series continues the tradition of epic storytelling from The Lion King films. Every episode of The Lion Guard features a winning combination of compelling stories, relatable characters, humor, and heart.

Muhanga and Muhangus turn to the Lion Guard one night after some hyenas invade the aardvark dens. Angry at how persistent they have been recently, Kion uses the Roar of the Elders to force them into the Outlands.

A few days later, and the Lair of the Lion Guard is suddenly crawling with termites. Before they can work out why, Ono arrives with news that the tree in which the Mekundu Bats dwell in is falling apart. The Lion Guard follow Ono over a log which breaks as they walk over it, landing them in the ravine below with more termites.

They get back to the task at hand, and Bunga enters the tree to eat the termites inside, scaring the bats out at the same time. The tree collapses, and the Lion Guard conclude that the log collapsed in the same way - due to the termites. They decide to speak with Kion's father, Simba, about the problem.

While on Pride Rock, Simba suggests asking the aardwolves about the termites. After describing them and explaining how they usually sleep in empty aardvark dens, Kion quickly realizes his mistake. Kion admits that he is at fault and his father assures him that everyone makes mistakes. The Lion Guard take off immediately.

They find the aardwolves in the Outlands with little problem, but they take off before the Lion Guard can explain, having become scared of the Guard. When Mjomba separates from the group, Bunga saves him from falling off a cliff, where the Lion Guard invite him back to the Pride Lands. Mjomba is happy, and searches for the rest of his pack so that they can all return.

Haya and Ogopa hide in a cave, certain the Lion Guard won't find them. But instead, Reirei and Goigoi enter. Before they can pounce, Mjomba locates them and tells them how the Lion Guard want them to return. Happy at the prospect of being able to eat termites again, they become excited, until Goigoi blocks them in with a large boulder.

The boulder is no problem for Beshte, who smashes through it. While the aardwolves escape, the Lion Guard take care of the jackals.

The aardwolves return home, and the Pride Lands is soon whole again, with the termite population returning to normal.

Differences from the Episode 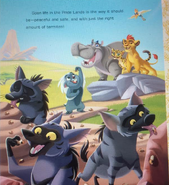 Page 15
Add a photo to this gallery

Retrieved from "https://lionguard.fandom.com/wiki/Too_Many_Termites_(book)?oldid=166539"
Community content is available under CC-BY-SA unless otherwise noted.