The Lion Guard Wiki
Register
Don't have an account?
Sign In
Advertisement
in: Zebras, Groups, Pride Landers,
and 3 more

Thurston's Herd is a group of zebras led by Thurston. They live in the Pride Lands.

Never Judge a Hyena by Its Spots

Thurston's Herd is grazing near a forest. Fuli, Beshte, Ono, and Bunga are conversing nearby, needing directions to Flat Ridge Rock. Thurston breaks away from the herd to talk with them, but fails to remember where he was going once he proves not to know where Flat Ridge Rock is. Ono suggests back to his herd, and Thurston rejoins the group.

Thurston's herd attends the Mashindano between the crocodiles Makuu and Pua. When Makuu throws Pua over, two members lead forward while another cringes back. They eventually witness Makuu's victory over Pua.

Eye of the Beholder

Thurston's herd is grazing at Chakula Plains. Ono arrives and eventually dives at the herd, causing them to panic and run further away from a nearby canyon. When Kion uses the Roar of the Elders to free himself and the Lion Guard from the canyon, a cloud of dust sweeps towards the herd, but they are unharmed and continue eating. Now free, Lion Guard ensures that Janja, Cheezi, and Chungu are unable to attack the zebras.

Thurston's herd panic and runs when they thought they saw hyenas.

The Lion Guard goes to help Thurston's herd, who are stampeding through the Pride Lands. The stampede causes a rock high above to fall, but Fuli is able to move the zebras out of the way just in time. When questioned as to what caused the stampede, Thurston explains that it was a "great big boom", and Ono deducts that he's referring to the thunder from a storm not long ago. Thurston goes on to inform them that the herd did what they always did when something scared them: panicked and ran. Ono assures the lead zebra that it is safe for the herd to go home now, but Thurston fails to remember where their home is. Kion has Ono guide the zebras back to their grazing grounds.

Nearby, unbeknownst to the herd, three hyenas watch and sing "Panic and Run", a song about attacking the herd. When the zebras reach the grazing grounds, a female zebra thanks Ono, and the herd begins to eat. But the hyenas attack, inducing the herd into a panic. The Lion Guard arrives and drives the hyenas away, but three members of the herd- Thurston, the female zebra, and a foal- are separated from the others, now located at Maji Baridi Falls. The Guard goes to fetch them, and with the help of Kion's Roar, are able to save them and presumably return them to their herd.

Thurston's herd are first seen grazing during Life in the Pride Lands.

When Ajabu tries to blend in with Thurston's herd, Thurston himself is quick to realise that this new face is not a zebra, declaring it loudly which gains the attention of a leopard named Makucha. After some more questions to the okapi, Thurston comes face to face with Makucha and starts to run, along with his herd. When he lands on top of Makucha he fears for his life, but becomes offended when Makucha is disinterested in him.

Thurston's herd can be seen during Bunga's song Running with the King.

Thurston's Herd can be seen at the Royal Mud Print Ceremony.

Thurston's Herd can be seen when Twiga walks to Pride Rock for the Savannah Summit.

Some of Thurston's Herd get their hooves stuck in some dry mud, after they go looking for the water which is normally there. When the Lion Guard arrive, Kion uses his Roar on a raincloud, dispersing some water which helps loosen the mud. Although Beshte gets swept away, Thurston and his herd members are saved, and Thurston tells his herd that they don't need to panic and run from now on, just panic, as that will be enough.

Thurston's herd are grazing by a river. Nearby, the Lion Guard are trying to calm a stamped of buffalo that are being swarmed by testes flies. After Ono informs the Guard that testes flies aren't fond of water, the guide the stampede into the river which annoys Thurston.

Thurston's Herd can be seen being attacked by Kenge.

When Bunga wants to give his uncles the best Christmas ever, Thurston's herd agree to join in with the celebrations. After rehearsing all night, they are about to give up until Bunga reveals to them how important it is to him, and why. They return and perform The Twelve Ways of Christmas with the other animals.

Thurston and one of his herd members watch Tamaa put on a show.

The herd attends the Kumbuka celebration for King Simba, singing along with Rafiki to "Good King Simba"

After a  dust devil comes near the herd Thurston gives the guard "advice" about stopping it. Kion takes the advice and the guard follows another dust devil. Thurston tells his herd that he's the real reason the Lion Guard are so successful. His herd  agrees with him.

Thurston and his herd come to the watering hole for a drink but is stopped by Bunga as he tells them to wait for the giraffes to finish. They are then scared by Shujaa the gorilla.

Thurston's herd is at Mizimu Grove watching  Timon and Pumbaa sing a song until Scar's army, comes to celebration. Kion gathers the Pride Landers to fight them. Scar  reveals himself in front of the Pride Landers and says he'll take over the Pride Lands. The animals start to panic and run however the Lion Guard clams them down. They get upset that Kion or Simba never told them that Scar was back and they wanna leave. The next morning Kion brings everyone to Mizimu Grove and says that  Makini's  babobab tree has surrived the attack. Everyone claims that they want to stay in the Pride Lands and Makini plants her tree.

Main article: Thurston
Thurston is seemingly the leader of the herd, often directing them as to what to do. He is a cowardly, petulant zebra who thinks highly of zebras. In any dangerous situation, he advises others to panic and run. He resembles the other members of his herd, but his mane is distinctively bushier, with a large tuft rising out in front of his head. Thurston's eyes are brown.

Main article: Kwato
Kwato is a young zebra foal, and friend to Mtoto, Kambuni, Shauku and Gumba. Like Thurston, the fur tuft on his head is pushed backwards a little, making him stand out from other zebra foals in the series. Although not much is known about him, he has been shown to be very playful, and looks up to the Lion Guard.

The following are known members of Thurston's Herd who have not received an official name. 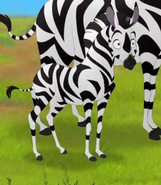