The Power of the Roar

The Power of the Roar is a read along CD and book based on the episode Never Roar Again. It was released on the 3rd of January 2017.[1]

Unleash the power of the Roar of the elders with Kion in this action-packed, interactive read-along storybook with CD that features the actual character voices and sound effects from the episode! Narrator by Jason Spisak. And turn it pages by eagle's screechs.

The Lion Guard are out on patrol, when suddenly they encounter Janja, Cheezi and Chungu in the Pride Lands again. Kion charges for Janja, ordering him out. Janja and his minions do so, and Bunga further cements Kion's warning to stay out. Kion praises the Lion Guard, and leaves.

Although the hyenas start to move back into the Outlands, Janja soon turns around to re-enter the Pride Lands. Although Cheezi and Chungu are worried, their leader shows no signs of relent. However, in the sky, Ono soon spots them and warns Kion of their return.

But before Kion can reach them, the hyenas bump into Nala, Kion's mother. When questioned as to why they're in the Pride Lands, Cheezi and Chungu become fearful, but Janja remains fearless. He declares her as not so tough, since she's all alone and pounces on her. But Kion hears the fighting, and rushes towards them. In disbelief that they would attack his mother, he warns them to get away from her, using an incredibly powerful Roar of the Elders which stemmed from his anger. The hyenas then run away.

Nala thanks her son. But just then, Kion's Roar bounces off a cliff wall and returns to them, knocking everyone down. A crack in the ground opens and Nala falls through. But Kion manages to save his mother and bring her to safety, where she once again thanks her son for the assistance. However, peering around at the damage his Roar had created caused guilt to overwhelm the young cub. He then notices that Ono's head feather's have also been blown off, just before the egret comments that his head suddenly felt cold.

Back at the Lair of the Lion Guard, Ono sees his reflection in the water. He worries about what the egrets will say, but Bunga tries to make him feel better, claiming that he'll stand out. Meanwhile, Kion peers at the paintings of his evil great uncle Scar in the lair. He recalled how his father had told him that Scar also possessed the Roar of the Elders, and that he had become hateful and used it for evil. His father had also warned him that if he used the Roar for evil, he could end up just like Scar. Bunga notices his friend, and adds that even his uncles said that Scar was the worst lion ever, adding that it was a good thing that Kion had the Roar now. Although Kion agrees, he is still troubled.

Suddenly, Zazu bursts into the lair. He informs them that a rockslide had cut the giraffes off from their watering hole. Kion then leads the Lion Guard out, but Ono is too embarrassed to leave. But after some persuasion from Kion, the egret follows his team.

After reaching the area, the Guard try to think of a solution. Bunga is adamant that Kion can use the Roar to blast the rocks away, but Kion suggests that Beshte move the rocks instead. He does so, and the pathway to the watering hole is reopened, after splashing everyone. After shaking himself clean, Bunga announces this to the giraffes.

As soon as they leave, they hear the sound of a klipspringer in trouble. Ono circles around for a better look, assuring him that they'll get him to safety. Once again, Bunga suggests using the Roar, but Kion wishes to find another way. He asks Beshte to knock down a dead tree instead. He does so, but as Kion starts walking across, the log crumbles. When Fuli, Bunga and Beshte try to save him, the log breaks completely and the Guard are washed away by the water. But the commotion also causes the Klipspringer to leap to safety.

After getting ashore, Bunga questions his friend on his hesitation to use the Roar. Kion confesses that, after what happened with his mother, he wasn't sure he'd ever use the Roar again. This shocks Bunga, as well as Makuu, who is lurking nearby.

Later, when Kion is alone, he speaks with his grandfather, Mufasa. He explains that the last time he used it, he was angry, and that he feared he would become like Scar. When asked why he used it in anger, Kion further explains that it was because the hyenas were attacking his mother. Mufasa then informs Kion that Scar was selfish, and never thought of anyone but himself, insisting that he speaks to the one he cares so much about, before he disappears.

Meanwhile, in the Flood Plains, Makuu and his float start to attack all of the creatures that were peacefully enjoying the water. As they run away, he calls for them to let their friends know that the Flood Plains now belonged to the crocodiles.

Back at the Lair of the Lion Guard, Bunga has covered Ono's head with a flower arrangement. Despite Ono's uncertainty, Bunga continues adjusting it for him. Just then, Fuli races in, having heard news from a mongoose that Makuu and his gang have taken over the flood plains. With Beshte, Fuli and Bunga racing off to face the crocodiles, Ono flies off to get Kion.

After finding Makuu, Bunga warns him that if he doesn't leave, they'll throw him out. Makuu questions on if they can do so with their roarless leader, which confuses them. But they're certain they don't need the Roar to defend the Pride Lands. Makuu then attacks Fuli but misses, while another crocodile is equally unsuccessful in taking down Bunga. Beshte also body slams another crocodile, just as Fuli leaps on Makuu's back. But then Makuu calls for backup, and the other crocodiles surround them. He asks them if they really believed that he would take over the flood plains with just three crocodiles, and Bunga admits that he 'kinda' did.

Elsewhere, Kion speaks with his mother, asking for forgiveness for using the Roar in anger. But his mother assures him that there was nothing to forgive, since he was saving her life. Kion then goes on to say how the Roar caused the earthquake that fell in, and how he has been afraid to use the Roar since. Nala tells her son that the Roar is part of who he is, and that he can't just stop using it. Kion then thinks about his mother's words.

Ono then swoops down and alerts Kion about Makuu. Kion is about to ask more, until he sees the flowers on his head, and stops to question him on that instead. Ono tells him it's a Bunga Original and that he'll explain later, before leading both Kion and Nala to the flood plains.

After finding Makuu, Kion asserts that the flood plains aren't his and that if he's not willing to share, he has to leave. But Makuu states that crocodiles keep what they take. Just then, two crocodiles appear from the water, dragging Nala into the water and holding her hostage by biting her forelegs. Kion is about to Roar in anger but stops, reminding himself not to do so in anger. Makuu laughs, believing that he has won, but Nala reminds her son that he must trust himself. With that being just the right encouragement he needed, Kion takes a deep breath and lets loose a powerful Roar that knocks the crocodiles that were holding his mother back. Kion then warns Makuu that the next time he tells him to leave, he should do so before the Roar smacks into Makuu and the remaining crocodiles, sending them into the air.

Bunga then compliments his friend, and Kion decides that he just needed to have a little faith in himself. His mother adds that she always had faith in him. Ono then swoops down and happily reveals that his feathers are already growing back. But nearby, it is revealed that Ono has started a trend with the other egrets, who have removed their head feathers to resemble Ono. 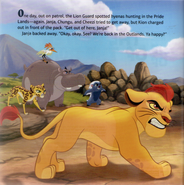 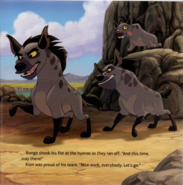 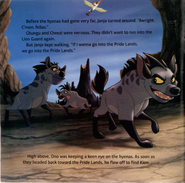 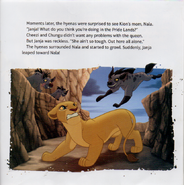 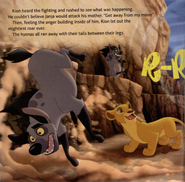 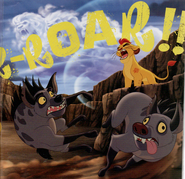 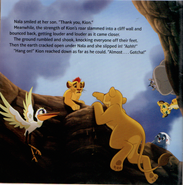 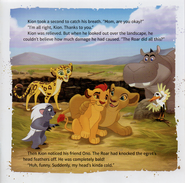 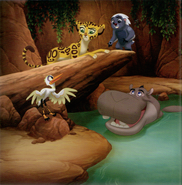 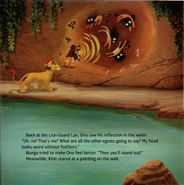 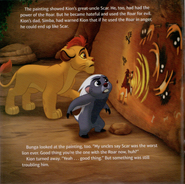 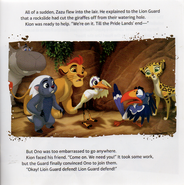 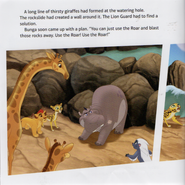 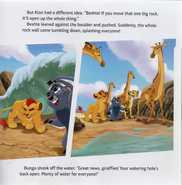 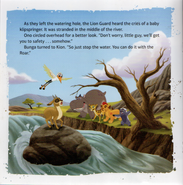 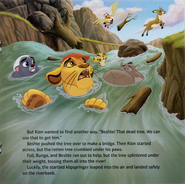 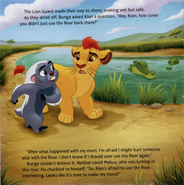 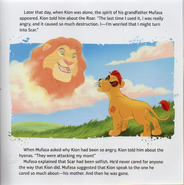 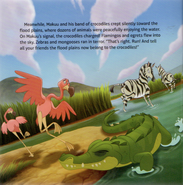 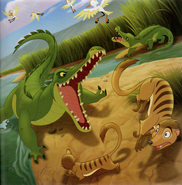 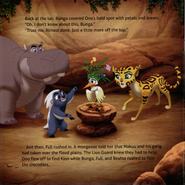 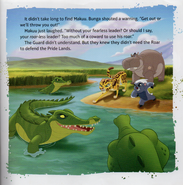 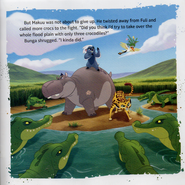 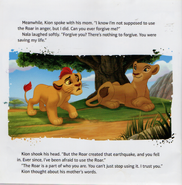 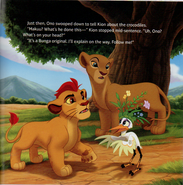 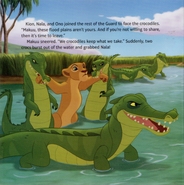 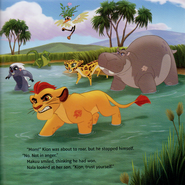 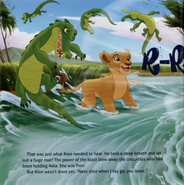 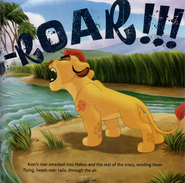 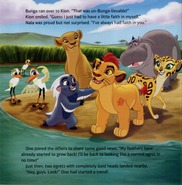 Retrieved from "https://lionguard.fandom.com/wiki/The_Power_of_the_Roar?oldid=278664"
Community content is available under CC-BY-SA unless otherwise noted.