Start a Wiki
watch 01:48
The Loop (Movies)
Do you like this video?
Information
Gallery

Swala's Herd is a herd of gazelles led by Swala that live in Mbali Fields at the edge of the Pride Lands.

Swala'a Herd can be seen being chased by Janja's Clan.

Some memebrs of Swala's Herd watches the Mashindano between Makuu and Pua.

Swala's Herd is first shown fighting with Muhimu's Herd over the limited grazing ground, with their leader Swala fighting the zebra leader Muhimu. The Lion Guard arrives, and Kion breaks up the fight by growling, which startles the gazelles and gets their attention. Swala soon admits that she gets cranky when she's hungry. The gazelles listen as Kion tells them that he knows someone who will know where the zebras and gazelles can go.Kion assembles both of the herds and tells them that they have a long way to go, but that he will ensure their safety. Muhimu calls out that she trusts Kion, and the gazelles agree. Soon, the herds set off for Mbali Fields. While the song Trail to Hope plays, the gazelles are shown hopping and walking with the zebras and the Lion Guard. However, Muhimu runs off towards the distant grass,causing a stampede. Swala asks the gazelles what they are waiting for, and they race after the zebras. Rocks begin to fall, and the gazelles and zebras turn around and flee. Once the dust clears, the stampede has stopped. A storm begins, and the gazelles look up as it begins to rain. Not long after, there is a flash flood, and some of the gazelles are caught in the current as they try to run. Ono leads the others up to higher ground, and Fuli and Kion rescue those in the water.The rain passes and the herd is safe. Swala remarks that though Kion saved her, it was his fault she was in danger. Three other gazelles nod in assent. Swala then confronts Kion, accusing him of not keeping his promise of grass for all and telling him that she isn't sure she trusts him, and a male gazelle says he is with her. However, after Muhimu makes a speech and Kion asks the Guard if they are ready, two gazelles agree. The rest of the herd cheers and they set off to the Outlandswhen Muhimu begins to have her baby, Ono, Beshte, and Fuli lead the herd to Mbali Fields while Swala and several other gazelles stay with Muhimu. The hyenas attack the group with Muhimu, and the zebras start to panic, whilst Swala remains calm. Kion commands them to circle around Muhimu and her son, and they obey. The hyenas soon leave, and Swala and the others reunite with the rest of the herd in Mbali Fields, where they have plenty of grass for everyone.

The Lion Guard goes after a creature called The Zimwi. They see it and spook the gazelles. The Guard calms them down and it turns out that the Zimwi was the Porcupine Brothers.

Swala's Herd try to climb up a steep, rocky slope to reach the grassland above. When the Lion Guard (being led by Simba) start to run towards her, she and her herd become panicked when they can't see them through the dust. They ascend the rocks, which cause them to fall. They manage to make it to safety but continue running out of fear towards some ostrich eggs. Soon, Ono arrives to calm them down. Swala at first cannot hear the egret due to the stampeding hooves, and she orders everyone to stop. They do as commanded, and Ono tells her not to worry about what he was trying to say.

Swala'a Herd is seen during the song Height and Sight.

Swala's Herd says goodbye to the Lion Guard as they make their way to the Tree of Life.

Swala is the leader of the herd. She is a gazelle with light brown fur, a white underbelly and face, and black markings around her eye and on her side. She is quarrelsome and fiery-tempered, but also shows kindness to her friend Muhimu. 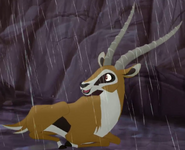 Add a photo to this gallery
Retrieved from "https://lionguard.fandom.com/wiki/Swala%27s_Herd?oldid=312243"
Community content is available under CC-BY-SA unless otherwise noted.