The Lion Guard Wiki
Register
Don't have an account?
Sign In
Advertisement
in: Groups, Porcupines, Adults,
and 2 more

Smun's Prickle is a group of porcupines led by Smun that lived in the Forest. They are all followers of Mama Binturong.

Smun's Prickle is spying on The Lion Guard, who is talking about needing more tuliza and scaring everyone away. Mama Binturong and her porcupines then decide to steal Makini's staff, which has tuliza in it and return to their hideout in the Stone Forest. Bunga reaches the hideout and battles Mama Binturong for Makini's staff. In the end, Bunga uses his secret weapon, his stink, and quickly gets away with Makini's staff filled with tuliza, ruining the rest of Mama Binturong's tuliza in the process. Mama Binturong decided she has had enough about tuliza and the whole forest and decides to leave the forest to get revenge on Bunga, abandoning the porcupines in the end.

Triumph of the Roar

Smun's Pickle comes to the Tree of Life to help Mama Binturong and Makucha's Army. They trap Ullu so sh

e can't warn the Night Pride, but she frees herself by scaring them with how far she can turn her head.

During the battle, Kion uses the Roar of the Elders on the porcupines and sends them flying into Fahari and Jiona. Kion then proceeds to blast them far away with the Roar.

Smun is the only named member of the prickle. 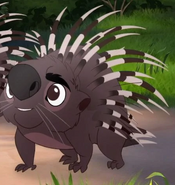 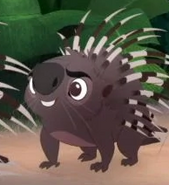 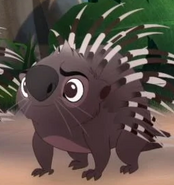 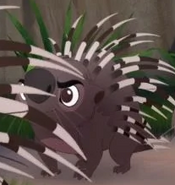