Single Figures are a set of The Lion Guard figures created by Just Play.

Each figure is articulated. There are 6 in the set- Kion, Bunga, Beshte, Fuli, Ono and Janja .

Based on the smash-hit Disney series, the Lion Guard follows the adventures of Kion – the son of Simba from the Lion King. These highly detailed figures are poseable and look just like the stars of the show. 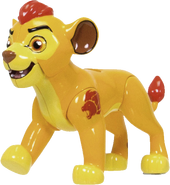 Prototype Bunga
Add a photo to this gallery

European (Simba) Boxes
Add a photo to this gallery
Retrieved from "https://lionguard.fandom.com/wiki/Single_Figures?oldid=167279"
Community content is available under CC-BY-SA unless otherwise noted.