watch 03:27
Wiki Targeted (Entertainment)
Do you like this video?
Play Sound

Rise of Scar is a large playset inspired by The Lion Guard. It was released in August 2017.

The center of the playset takes the form of Scar. It includes a figure of Kion, and some sets also include an additional figure of Janja.

Although not actual figures, the playset also features Kiburi and Ushari, as well as a currently unknown Red Colobus character. An unnamed skink can also be found an the bottom (although it is not painted as shown in stock art photos).

When Scar's nose is pressed, his mouth will make a roaring sound and his eyes and the fire around him will light up. Ushari can be moved to 'attack' another character, and the log bridge can fall into Kiburi's waters beneath. There are also several other interactive points.[1] 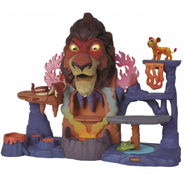 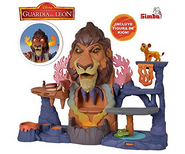 Early prototype image
Add a photo to this gallery

Retrieved from "https://lionguard.fandom.com/wiki/Rise_of_Scar_Playset?oldid=307420"
Community content is available under CC-BY-SA unless otherwise noted.