Return of the Roar

The story begins by introducing the audience to Kion and his best friend, a honey badger named Bunga. The two are playing near Pride Rock, where Kion's father, the ruler of the Pride Lands, Simba, is teaching his daughter Kiara about her future as queen of the Pride Lands. Kion and Bunga's antics get in the way of Simba's lesson, and so the two take their fun farther into the Pride Lands to avoid any more disturbances.

Kion and Bunga enjoy playing together with a baobab fruit, which they use as a ball, but soon the ball rolls off into the Outlands. Kion is hesitant to go down, since his father strictly prohibits him from venturing there. Bunga, on the other hand, has no fear of the Outlands, and gladly leaps down. However, shortly after reclaiming the fruit, a hyena named Janja orders two other hyenas - Cheezi and Chungu- to grab Bunga for his lunch. Worried for his friend's safety, Kion lets loose a huge roar, leaving the hyenas in shock, which gives Bunga a chance to climb back to safety. Bunga is curious as to how his friend produced such a roar, and Kion admits that he doesn't know how.

Meanwhile, Simba and Rafiki overhear the roar, which they know is the Roar of the Elders. Simba at first does not believe that his son is ready, with him still being a cub. Kion and Bunga then arrive back at Pride Rock. Simba and Rafiki lead them both to a secret lair hidden within Pride Rock - The Lair of the Lion Guard. Simba explains to his son that his great uncle Scar was also gifted with the Roar of the Elders, and that he lost the power by using it for evil and destroying his Guard. Simba also explains that it is now Kion's turn to lead the guard, and that he must assemble the fiercest, bravest, fastest, strongest and keenest of sight.

Kion doesn't hesitate to begin his mission, and immediately selects his friend Bunga, claiming that he doesn't know anyone braver than him. Bunga rushes to tell his uncles, Timon and Pumbaa. Both are initially concerned for him with such a daunting task, but Bunga manages to win them over.

A vulture named Mzingo overhears the news of a new Lion Guard, and relays the news to Janja, the leader of the hyenas. The pair concoct a scheme to take down as many animals as they can before the new Lion Guard is formed, starting that same day.

Meanwhile, Kion has assembled the animals who he believes best fit the criteria for being members of the Lion Guard. These members are: Fuli the cheetah, Beshte the hippopotamus and Ono the egret. Fuli wishes to be the fiercest member. Bunga then encourages Kion to show her the Roar. Kion is hesitant, as he does not wish to abuse his power like Scar. However, when he attempts to use it just for this occasion, all he can manage is a tiny squeak. Simba then arrives to see the new Guard, but having taken a look at Kion's choices, tells his son that the Lion Guard has always been made of lions.

Kion, needing to be alone, wanders around the Pride Lands. A voice calls to him from the clouds, and Kion looks high ino the sky and sees his grandfather Mufasa appear in the clouds. Kion expresses his concerns to the King of the Past, believing that he is not yet ready for the responsibility. He also expresses his fear of turning out like Scar. Mufasa tells Kion to believe in himself, and promises to watch over him, before vanishing.

Shortly thereafter, Bunga calls Kion and tells him that the hyenas are attacking the gazelles. Kion and Bunga then rush off to find the rest of the Lion Guard. Once they are together, Kion places his paw on each of his friend's shoulders, giving them the Mark of the Lion Guard.

The Guard quietly make their way down to the gazelle's grazing grounds, before launching a surprise attack with Kion at the head of the group. With Ono taking care of Mzingo from the skies, the rest of the group focuses on taking down the hyenas. Janja taunts Kion, but Kion makes it clear that the Lion Guard is there to defend the Pride Lands. He lets out the Roar of the Elders, and the hyenas scramble back to the Outlands.

After witnessing the whole event, Rafiki assures Simba that Kion is ready. As Kion and his Guard rush back to Pride Rock, Simba is happy to accept the new Lion Guard, acknowledging that it is now their time.

Learn how the Lion Guard came to be in this beautifully illustrated picture book based on the upcoming Disney Junior movie event. Includes a free download of the Disney eBook!

The legacy of The Lion King continues with The Lion Guard. Join Simba's cub, Kion, in an epic adventure in this beautifully illustrated picture book bundled with an eBook!

First there was Mufasa, then there was Simba, and now there is Kion! As Simba’s second cub, Kion learns that he is destined to lead The Lion Guard: a team of animals charged with defending the Pridelands and protecting the Circle of Life. It’s a daunting task, but Kion assembles a team of the fiercest, bravest, fastest, strongest, and keenest animals in the Pridelands to help him defeat evil predators and keep the kingdom safe. Join Kion and the Lion Guard in this beautifully illustrated picture book, which includes a free download of the Disney eBook![2] 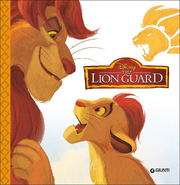 Italian cover
Add a photo to this gallery

Page 33
Add a photo to this gallery

Retrieved from "https://lionguard.fandom.com/wiki/Return_of_the_Roar?oldid=214428"
Community content is available under CC-BY-SA unless otherwise noted.