watch 02:03
Wiki Targeted (Entertainment)
Do you like this video?
Play Sound
Information
Gallery

Pinguino's Rookery is a group of Penguins who live at the Tree of Life They are led by Pinguino.

Pinguino's Rookery is seen sliding down ice. Beshte soon comes and accidentally spills some snow onto the slide, causing them to go flying. Angered, Pinguino, the leader, goes to talk with the Night Pride and finds some other animals heading to the Tree of Life for the same reason. Pinguino says that he will do the talking and tells everyone about "Poa the Destroyer (song)" which is also his nickname for Beshte. They soon warn Baliyo about him.  Later, Beshte asks Pinguino and his rookery if they told Baliyo anything about a bad guy. Pinguino denies, and Beshte moves on, accidentally breaking part of the ice slide in the process. Pinguino leaves the ice slide and meets up with Rani and Baliyo, who are looking for Poa the Destroyer in the tundra. Pinguino explains that "Poa" came to find out who snitched on him and broke more of the penguin's ice slide "to show them who's boss". Pinguino is angry that the Night Pride has not yet done anything about him. He directs them to the last place he saw Beshte heading; the Tree of Life. After finding out who the culprit is, the Night Pride summons Pinguino's rookery to the Tree of Life. Pinguino initially believes it's a party and gets excited, but after being told by Bunga he has been summoned to meet Poa the Destroyer and learn his true nature, Pinguino refuses to go and takes the trail back home.

At the gathering, Pinguino arrives late, being carried by Beshte. Pinguino explains to everyone how he saved his life and tells them that he is stronger and as gentle, soft, and fast as a penguin. Pinguino chants his name, and everyone joins in.

Pinguino's Rockery is shocked to learn that Queen Janna had passed away and attends her funeral. He later attends Rani's coronation as she becomes the queen of the Tree of Life.

Pinguino's Rockery is seen at Rani and Kion's wedding.

Pinguino is the leader of his Rookery. 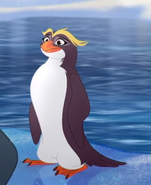 Add a photo to this gallery
Retrieved from "https://lionguard.fandom.com/wiki/Pinguino%27s_Rookery?oldid=322572"
Community content is available under CC-BY-SA unless otherwise noted.