Pim's Group is a group of hyraxes that reside in the Pride Lands.

When Fuli sings My Own Way, watching her as family of hyraxes as she sings.

When Mtoto, Shauku, Gumba, Kambuni, and Kwato are all playing Lion guard. Instead of being hyenas they decide to let the hyraxes be the hyenas and they chase them.

Ono spots the hyraxes when Thurston's Herd is heading right to them.

Hyrax and his family briefly appears during Life in the Pride Lands. Hyrax rushes up a tree with another hyrax, vanishing into the leaves at the top.

Beshte and the Hippo Lanes

When Beshte is making the Hippo Lanes explaining how they do it, he helps the hyraxes get across the Flood Plains.

Ono and the Egg

The hyraxes are being chased by Mpishi and she manages to grab Hyrax but before she can eat him, Ono flies in and saves one hyrax.

Hyrax and his family are saved by the The Lion Guard after they are trapped by rocks. Then the guard leads them towards the watering hole since their too thirsty to walk around.

Hyrax and his friend are seen eating leaves, and they run of when they see Kiburi and his crocs pass by them.

The hyraxes are seen running away after Kenge steps into the Pride Lands.

Hyrax and his family attends the Kumbuka celebration for King Simba, listening to Rafiki while he performs Good King Simba.

The hyraxes are seen trying to cross a bridge to get to the watering hole, but due to it being unstable they must turn around. After the bridge collapses, Beshte is able to act like a one, finally allowing the hyraxes to cross over him and to go drink water

When a dust devil comes near Ukuni Woods Beshte knows that the hyraxes live there. The guard goes to rescue them when they get their they see two of hyraxes fighting over . a  granadilla. Soon they get swooped away and become trapped in the dust devil Bunga and Beshte catches them. Beshte is happy that the hyraxes are safe.

When Shujaa helped Kifaru direct him to the Watering Hole. He smashes rocks and makes a path for the rhino. However, it turns out that the rocks were the hyraxes' home. that Shujaa destroyed. Beshte helps the hyraxes find a brand new home.

Hyraxes Group watches as Queen Dhahabu and her herd goes up to Pride Rock. They also sing and dance along to Prance With Me.

Friends to the End

The hyraxes are seen in a flashback during the song "Friends to the End", riding on the Guard as they cross a river.

After Kion roars at a giant wall turns out that there's a giant lake on the other side. The Lion Guard, Jasiri, Janja and Azaad help the hyraxes. 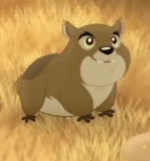