The Lion Guard Wiki
Register
Don't have an account?
Sign In
Advertisement
in: Groups, Reptiles, Lizards,
and 4 more

Ora's Bank is a group of three Komodo dragons led by Ora.

When Lion Guard arrived to get some Tuliza without warning Ora came by he decided to attack them with his friends is about to attack when Kion has an accident when using his Roar to damaged the beach including Beshte 's new friend Lumba-Lumba. At the end Kion using the roar to make the way to the other side the island and Lumba-Lumba got free and back to the ocean and Ora and his bank got swept away from the waves with Ora becoming washed up on the mainland.

Triumph of the Roar

Mama Binturong has Smun gather Ora's Bank along with Makucha's Leap to help fight the Lion Guard and the Night Pride. However, Kion uses the Roar of the Elders to blast the army away.

Ora is the leader of his bank.

Komodo Dragon is a member of his bank. 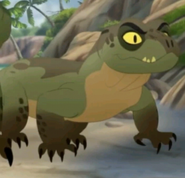