The Lion Guard Wiki
Register
Don't have an account?
Sign In
Advertisement
in: Groups, Pride Landers, Birds,
and 2 more

Ono's Flock is a flock of egrets that live in the Pride Lands.

Ono's Flock are resting peacefully, until Kion and Bunga approach them during their game of Baobab Ball. Noticing their arrival, Ono calls out to his flock, telling them to scatter. As the pair rush into them, Ono's flock members do as he asks, scattering in all directions to escape getting hit by them as Kion and Bunga continue playing their game through the flock.

Ono mentions that he must return to his flock for dinner, otherwise they will worry about him. Believing himself to be a bad friend by letting her eat alone, Ono later invites Fuli to hunt with him and his flock. Fuli is excited at first, until she learns that the flock are only interested in eating the flies from around the elephants' feet. The flock hop around her, not stopping when she gets hit by what she perceives to be mud from the elephants. After sniffing, Ono reveals that is not actually mud on her shoulder.

Ono's Flock can be seen during "Hero Inside."

Ono's Flock can be seen during "Life in the Pride Lands."

After Kion unintentionally causes Ono to lose his feathers, Ono frets about the reaction of his flock, and is comforted by Beshte, Bunga, and Fuli.

Later, after aiding the giraffes, the Guard comes across a trapped klipspringer in the middle of a river, and Kion tells Beshte to knock down a withered tree, and once Beshte's done so, Kion walls across it to get the klipspringer. Failing to hear his warnings of the tree's instability to support their combined weight, the rest of the Guard follows him, causing the branch to snap. After the Guard comes out of the river, and Kion remarks on the status of the klipspringer, Ono alighns on a tree branch, and is noticed by a member of his flock, who questions him on the state of his feathers, causing Ono to realize that he is completely featherless.

After the Guard has managed to defeat Makuu, and save Queen Nala, Ono's Flock tells him that they have also removed their feathers, causing Beshte to warmly remark that Ono has stated a trend.

Ono's Flock can be seen with the other Pride Lands birds. They're excited to see Hadithi.

Beshte and the Hippo Lanes

Ono's Flock can be seen flying over the flood plains.

Ono's Flock can be seen flying over the Watering Hole.

Ono's Flock can be seen flying over Pride Rock.

Ono's Flock is seen during the The Twelve Ways of Christmas song.

Ono's Flock is breifly seen when Fuli is talking to Kongwe and  Makini on how she sees things when she's going fast.

Ono's Flock says goodbye to Ono as he and the Lion Guard make their way to the Tree of Life.

The following are known members of Ono's Flock who have not received official names. 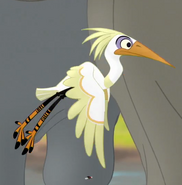 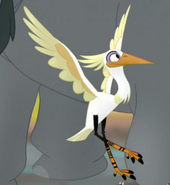