The Lion Guard Wiki
Register
Don't have an account?
Sign In
Advertisement
in: Birds, Groups, Vultures,
and 4 more

Mzingo's Parliament is seen briefly during Tonight We Strike twice. On both occasions, he is perched on a branch near Mzingo.

Eye of the Beholder

The flock is seen gathered on a tree when they are suddenly interrupted by Mwoga, who is late to an in-progress meeting. Mzingo offers up a vote to allow Mwoga to join the meeting, and his fellow vultures agree, and Mwoga settles next to a fellow member. When Mzingo asks if Mwoga had a good reason for being late, Mwoga replies that he discovered that Ono of the Lion Guard had lost sight from one of his eyes. Mzingo and his flock decide to keep an eye on the situation and consider a sub-committee to deal with the issue. After a unanimous vote, they agree, before shifting the conversation to other matters.

Mzingo's committee appears perched in a dead tree. Before calling their meeting to order, they first chose to sing their anthem, All Hail the Vultures. Once they are finished, Mwoga notices the worn-out Fuli resting not far from them. Mwoga suggests forming a subcommittee to assess their options, but Mzingo decides to simply attack her without the usual procedures.

The vultures land and taunt the cheetah. When Mwoga double checks with his leader on her physical state, Mzingo informs him that she has overexerted herself and is thus harmless. As per a parliamentary vote, they then move forward to attack, promising her that it will be over quickly. Nearby, Ono sees Fuli in danger. The Guard rushes to her aid, with Kion pushing Mzingo out of the way, Bunga attacking another vulture and Ono taking care of Mwoga. As another pair are about to strike the fallen cheetah, Beshte charges in and knocks them away. Mzingo calls for his group to reconvene, and Kion steps forward. He warns the vultures that when you mess with one member of the Guard, you mess with the whole Guard. He then uses the Roar of the Elders to blast the birds away.

Mzingo, Mwoga and another member of the committee are first seen chasing after a Baby Baboon. When they dive into action, the Lion Guard arrive just in time to frighten the vultures away, having seen them circling the baboon just before the attack. Once safe, the Guard task Fuli with getting him home.

Fuli later meets up with the same three vultures while on her way to Mapango Cliffs. Mzingo comments that he saw the Baby Baboon somewhere nearby, but he only becomes certain when the Baby Baboon accidentally steps on a stick. As Mzingo and his committee settle to investigate nearby, Fuli announces that she has an idea. Part of the grass begins to shake, and Mzingo gets excited. His excitement vanishes when Fuli pops her head out. He questions where the Baby Baboon is that he was trying to 'help', and she responds by telling him that the Baby Baboon has likely gone home and that she's busy hunting, though Mzingo is still visibly suspicious. He asks her what she is hunting, and she replies that Mzingo himself is looking rather plump. The vulture hurriedly flies away with the rest of his Committee, leaving the path open again. But just as she reaches the cliffs and the Baby Baboon reaches his mother, the vultures appear again. They dive towards the Baby Baboon and his mother with Mzingo exclaiming that Fuli can't climb faster than they can fly. He is soon hit by a flying fruit, since entire troop is throwing fruit towards them. This causes Mwoga and the other vulture to crash into one another. Mzingo instructs Mwoga and the other vulture to go for the baby, whilst he takes care of Fuli. He dives towards her and she swipes back, but Fuli slips at the edge of her rock. She manages to grab hold of the side. Before Mzingo can strike her, Baby Baboon hits him with a fruit, which knocks him down. He becomes briefly entangled in a tree branch hanging over the cliff, but soon regains his posture. He flies upwards but Fuli leaps towards him, pinning him to the ground. She orders Mzingo to call off his committee and he does so, flying away with them.

Ono and the Egg

They are mentioned by Mwoga when he teams up with a harrier hawk named Mpishi. He ponders over whether or not he should go with her offer of carrion, or put it to the parliament first. He decides to go with the former.

Mzingo's parliament is shown to have joined the Army of Scar. Mzingo listens as Scar unveils his latest plan - to attack Simba with scorpion venom from Sumu.

After cornering the Lion Guard in the Outlands Volcano the parliament attack Ono, preventing him from finding a way out. When Kion uses his Roar to blast the other army members away, Scar orders Mzingo's parliament to grab the gourd containing the antidote. They attack Makini, whose Bakora Staff holds the gourd, but are forced away by Ono. On the second attack, Bunga and Fuli defend the apprentice mandrill until Kion arrives. He proceeds to use the Roar on the vultures, sending them back to the volcano.

Scar orders his army to attack Kilio Valley, so Mzingo, Mwoga, and another vulture promptly use enkindled sticks to set the valley on fire while Janja's clan, Kiburi's Float and Reirei's Pack attack Ma Tembo's Herd and the Lion Guard. After driving out their enemies, they soon start to bicker over who performed the best, with Mzingo pointing out their contribution to the battle. With Mwoga still holding a fiery stick, he soon drops it upon Reirei's alert, causing Scar to rise up from the tiny flame. He orders them to stay in the valley since his plan is to take the Pride Lands piece by piece. Later, Janja offers to run Kilio Valley for the benefit of everyone. Reirei protests, claiming that jackals should run it, followed by Kiburi who believes that crocodiles should run the place. Mzingo follows suit, demanding that proper parliamentary procedures are followed, which his parliament also agree with. This leads the three groups to argue over who should run the dump. Later, Ono discovers that all the groups, including Kiburi's float, are still arguing over who should be in charge of Kilio Valley.

Mzingo and Mwoga chase after Ono when the egret enters the Outlands to see what Scar is up to. They do not see Kinyonga when she later infiltrates the volcano.

Scar orders the vultures to drop fire from the sky all over the Pride Lands. However, the Lion Guard gets help from Pride Lands birds, Hadithi, Anga and the other birds to stop them.

Scar orders Mzingo's vultures to attack the Pride Lands along with Kiburi's Float and Reirei's Pack. When Scar gets defeated, Jasiri becomes in charge of the Outlands. Mzingo says that he'll follow the Circle of Life as she says.

Mzingo is the leader of the flock, and an ally to Janja and his clan. He sometimes acts as a spy for Janja and is very devious in nature, yet he retains sophistication at all times.

The following are known members of Mzingo's Parliament who have not yet received official names. 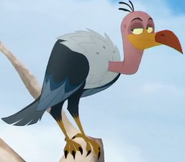 Janja is the leader of the army's hyena faction. He bears the typical appearance of a hyena - ashy gray fur with a darker muzzle and dark spots. He has a small notch in his left ear and a ridge of black fur along his back. Janja is greedy, trouble-making, and aggressive. He despises the Lion Guard, especially their leader, Kion, and his Roar.

Kion is a lion cub who is the leader of the Lion Guard. Ultimately, Mzingo and Kion used to hate each other, until Mzingo helps Jasiri and her clan.

Jasiri is a female hyena who now serves as the leader of the Outlands. Mzingo and his Parliament treats her as their Prime Minister.