watch 02:03
Wiki Targeted (Entertainment)
Do you like this video?
Play Sound

My Busy Books is a book, figurine and playmat set inspired by The Lion Guard.[1]

An engaging storybook and toy in one activity kit! My Busy Books offer full page illustrations, a story, 12 figurines, and a playmat that bring the characters to life and ignite your child’s imagination.

Kion is the leader of the Lion Guard who, after letting out his first Roar of the Elders, must assemble the Lion Guard. As leader, Kion is the fiercest. He chooses Fuli for her speed, Bunga for his bravery, Beshte for his strength, and Ono for his keen sight.

Beshte is described as being laid back, but always ready to defend his home from danger. When Pua drops by, he asks permission before he and his float feast on the fish, since he understands the Circle of Life.

Kion's father, Simba, is initially concerned about Kion leading the Guard. After he saves his sister Kiara, Simba starts to feel better about his position. Once he has spoken to Rafiki, the King understands that his son is no longer a cub, and is ready to lead the Lion Guard.

Bunga's uncles, Timon and Pumbaa, are very carefree. They aren't able to understand why Bunga would want to join. After Bunga explains that it's not Hakuna Matata, but Zuka Zama, they finally allow him to join, even though they remain cautious.

It's explained that sometimes the Lion Guard has to help out other animals, such as Hyrax when he got too close to Ushari. At other times, they battle the hyenas, who are against the Circle of Life. But with Kion's Roar, the Lion Guard are able to win.

Finally, the Lion Guard stands on a rock overlooking the Pride Lands, knowing that it is their duty to protect everything in it. 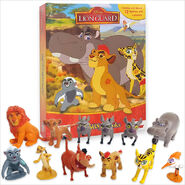 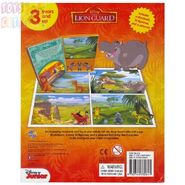 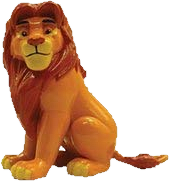 Playmat and figures
Add a photo to this gallery 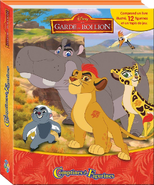 Swedish cover
Add a photo to this gallery

Retrieved from "https://lionguard.fandom.com/wiki/My_Busy_Books?oldid=233436"
Community content is available under CC-BY-SA unless otherwise noted.