Start a Wiki
watch 01:48
The Loop (Movies)
Do you like this video?
Information
Gallery

Muhimu's Herd is a group of zebras led by Muhimu. They live in Mbali Fields at the edge of the Pride Lands.

Muhimu's Herd and Swala's Herd are fighting over grazing grounds due to a lack of grass, with Muhimu and Swala in the thick of things. The Lion Guard arrives, and Beshte charges through the zebras so that the rest of the Guard can pass by. Kion rushes forward and breaks up the fight by growling. Muhimu and Swala explain the situation, both claiming that the grazing grounds belong to their herds. Beshte observes that the two herds aren't really mad at each other, they're simply hungry. Kion decides that they need to find a place with enough grass for both herds, and the zebras listen as Kion explains that he knows someone who will know where enough grass can be found.

Muhimu's Herd and Swala's Herd later assemble. Kion makes a short speech, announcing that he'll do his best to lead the herds safely to Mbali Fields. Muhimu calls out her support, and her herd cheers in asset. The Trail to Hope begins, with the Lion Guard leading and guiding both herds. Fuli stops a member of Muhimu's Herd from straying away from the group, and a second zebra pauses to take a drink. However, the herd soon tires, complaining of hunger. The sight of Mbali Fields in the distance sends Muhimu charging towards it. One herd member decides that this is a great idea, and the zebras race after their leader, with the gazelles soon following them into the canyon ahead. This causes a rock to fall, but the zebras fortunately move out of the way in time.

A storm begins, and the zebras all look up as the rain falls. The Lion Guard begins to lead the zebras in a different direction, but a flash flood soon sweeps through the canyon. Ono leads the majority of the zebras and the gazelles up to higher ground, but some are swept away by the water. Beshte dives in and allows a pair of zebras to climb onto his back before swimming back to shore and collapsing with the zebras on top of him, and Bunga rescues Muhimu by helping her swim.

Once everyone is safe, one member of Muhimu's Herd questions Kion's decision. Another confronts him along with Swala, explaining that the herds have been talking, and that they're not happy. Kion tells them to trust him, and when Swala says that she's not sure she does, a member of Muhimu's Herd agrees. However, Muhimu supports Kion, declaring that she has faith in him. Kion thanks her and tells the herds that to get to Mbali Fields, they'll need to cut through the Outlands, but promises to keep the herds safe. Muhimu's Herd calls out support, and Kion leads the two herds forward.

In the Outlands, Kion orders them to be quiet. One zebra begins to ask a question, but Muhimu silences him. She then begins to give birth to her foal. The majority of the herd continues on their way to Mbali Fields with Ono and Fuli leading them. Swala decides to help her friend, and she assembles a number of female zebras to join her. Muhimu successfully gives birth to her son, but the group is soon attacked by Janja, Cheezi, and Chungu. The zebras initially panic and run, but Muhimu orders them to listen to Kion, and they form a circle around their leader and her son. Chungu lunges forward, and a member of Muhimu's Herd kicks him away forcefully. However, when Janja approaches, the zebras move to the side. Thankfully, Muhimu's son is able to kick Janja away, saving his mother's life. The herd makes it safely to Mbali Fields, where they graze peacefully with Swala's Herd.

Reirei's Pack notice the herd grazing peacefully, and make a move. They attack the herd with the youngest targeting Hamu. But the Lion Guard arrive in time and drive off the (jackals before anyone can get hurt, with Kion saving one particular member of the herd from Reirei, while Beshte and Fuli tackle the other adults, and Bunga and Ono rescue Hamu from the younger members of the jackal pack.

Muhimu's Herd is seen being watched by some vultures, until Ono arrives to guide them to safety.

Muhimu is the leader of the herd. She is a zebra with blue eyes and a black-and-white striped body. She is a calm and effective leader who shows great faith in Kion.

Hamu is a male zebra foal in the herd. He is the son of Muhimu. He is strong, spirited, and playful, and is considered to be very brave.

The following are known members of Muhimu's Herd who have not yet received an official name. 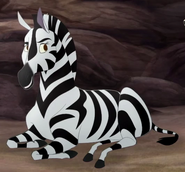 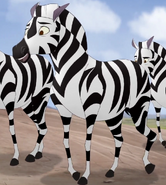 Add a photo to this gallery
Retrieved from "https://lionguard.fandom.com/wiki/Muhimu%27s_Herd?oldid=331860"
Community content is available under CC-BY-SA unless otherwise noted.