The Lion Guard Wiki
Register
Don't have an account?
Sign In
Advertisement
in: Featured, Lions, Male Characters,
and 14 more
English

Simba's Pride (formerly)
Pride Landers
Great King of the Past

Mufasa is a Great Lion of the Past, Scar's older brother, Sarabi's mate, Simba's father, Nala's father-in-law, Kiara and Kion's paternal grandfather and the former King of the Pride Lands.

He first appears in The Lion Guard: Return of the Roar and is a recurring character throughout The Lion Guard, albeit as a spiritual guide for Kion. When the Lion Guard arrive at the Tree of Life Kion asks Askari for council, a relative of Mufasa.

Mufasa is shown in the clouds with dulled color. He is a powerful, strong well-built lion, with orange fur and a creamy peach muzzle and underbelly. His mane is thick and dark red, the same color being present on the tuft at the end of his tail. His eyes are dark brown, and his nose is pink. He has a square jaw, small eyes, and thin eyebrows. In a cave painting, he was shown to be taller and broader than his brother Scar.

Mufasa was a wise king, and this trait is still present as a spirit. And yet, he is convinced that confidence comes from inside of oneself, not from what others think as well.[1] He is kind-hearted, understanding, and encouraging, always ready to pay very close attention to Kion's concerns, and offered helpful advice to boost Kion's spirits.

Mufasa, like Kion, Simba and the rest of his living family, respects and understands the Circle of Life.[2] He believes that family should constantly support each other[3], and that while there are times to back down, true leaders must also know when to stand their ground.[4]

Despite his supposedly wise and caring nature, it's revealed in a flashback that during his younger years, Mufasa gave his younger brother the nickname of "scar" after Scar himself defeated a rogue lion and cobra who attempted to host an uprising against the great King himself by using Scar's power. This shows that as a teenager, he can be cocky, playful, but also very foolish, and insensitive, as this infuriated his brother, and eventually set a rift between the siblings so powerful, that it would lead to Mufasa's undoing.

Prior to The Lion Guard: Return of the Roar

Mufasa was a mighty king of the Pride Lands and was married to a lioness named Sarabi. One day, Mufasa's younger brother and leader of the Lion Guard, returned from a patrol in the Outlands after defeating a rouge lion and his henchman, who attempted to corrupt him and overthrow Mufasa. However, instead of praising his brother for this, Mufasa just patted him on the head and gave him his nickname after the scar over his left eye, which he got from the cobra. Outraged at not being taken seriously by his brother, Scar attempted to overthrow Mufasa as King but failed as the rest of the Lion Guard refused to help him, resulting in Scar killing them with the Roar of the Elders, which resulted in him losing the roar completely. Eventually, Mufasa and Sarabi had a son named Simba, who was destined to succeed Mufasa. One day when Simba was a young cub, Mufasa was betrayed and killed in a wildebeest stampede by Scar, with Scar accusing Simba of the murder, before banishing him from the Pride Lands, and later taking over Pride Rock with his hyena army. After his death, he took a spiritual form as one of the Great Lions of the Past, and later returned as a ghost and convinced his son, now a young adult, to return to the Pride Lands and take his rightful place as King.

Mufasa appears in the sky to Kion after Simba rejects his son's Lion Guard proposal. Kion immediately begins to share his concern with his grandfather, believing that he isn't ready or that he might turn out to be just like Scar. Mufasa then relays some words and explains the reason why Simba is worried about is that he loves him. He also assures Kion that Scar was vastly different to him in his goals and personality. This gives Kion a much needed confidence boost, and Mufasa fades away.

Kion needs advice after Makuu becomes the new leader of the crocodiles and causes problems in the Pride Lands. He leaves the Lion Guard back in the lair and asks his grandfather if he's there, hoping to get some advice. Mufasa appears and imparts some advice, telling his grandson that standing your ground doesn't necessarily mean being physical, but that you're not afraid to stand up to someone who is wrong.

Kion calls for his grandfather over concerns on how the recent storm has affected the Pride Lands, expressing an interest in using his roar to blast the storms away from the Pride Lands, saving a lot of hassle for him and the Pride Landers. However, Mufasa reminds him that the water from the storm was needed by the animals, and that often a quick fix is not the right answer for a problem.

Can't Wait to be Queen

Mufasa appears to Kion after he storms out of Pride Rock due to an argument with his sister Kiara, who was serving as temporally queen. He asks his grandson what's wrong, and Kion explains. Mufasa reminds him that Kiara is still his sister, and that she will always need him, especially if she is in the wrong. Kion thanks his grandfather and goes to save his sister from Janja and his henchmen.

After Kion overhears the animals complaining about his leadership, Mufasa appears to Kion after he leaves the herds and the Guard temporarily to think things through. Mufasa knows that his grandson is feeling troubled and, after Kion explains the situation, Mufasa tells him not to let their lack of faith affect his own. He assures him that he will be trusted, so long as he himself has confidence.

Mufasa appears when Kion calls for him, having almost hurt his mother by accident when Janja's Clan attacked her. After hearing his grandfather mention the power of the roar, Kion contemplates never using the Roar again. Mufasa consoles Kion, by not only reminding him that Scar's misuse involved his own selfishness, but also by asking why Kion used the Roar out of anger. When Kion explains why, Mufasa informs Kion that Scar never cared for anyone, and suggests speaking to the one he cares so much about.

After Kion unintentionally disappoints his father, Simba, when he jumps to conclusions regarding Makuu's involvement in the Savannah Summit, he isolates himself and summons Mufasa. He gently questions Kion over Makuu's actions, to which Kion denies the crocodile having done wrong, and Mufasa responds by prompting Kion to remember an old saying of Rafiki's. Kion agrees, and, after thanking Mufasa, rushes off to correct his mistake, with Mufasa warmly stating his assurances.

When Kion begins to have concerns over the responsibility of caring for and protecting the Pride Landers during the Dry Season, he decides to seek the guidance of his grandfather.

Mufasa gently questions him, and Kion reveals his concerns. Mufasa praises the Guard, and patiently reminds Kion that hardships are present in both seasons, and the effects of the difficulties on the animals, to which Kion agrees, and promises to keep control of the Roar.

Mufasa is later seen during The Path of Honor, gazing proudly at his son, and his grandson.

Kion and Simba are speaking to Mufasa, warning him that Scar is back. Mufasa shows concern at the return of his evil brother. Although the problem is beyond his experience in dealing with the spirit of an evil lion from the past, he is certain that, between his son who has already saved the Pride Lands before from Scar and his grandson who is the leader of the Lion Guard, that they can defeat Scar. He leaves them with the message that the wisdom is within the Pride Lands, leading both lions to believe that he could be referring to an animal. And Simba knows just who he may be referring to.

When Ma Tembo's Herd start to leave the Pride Lands because Kion can't find a new home for them after Kilio Valley is destroyed, he talks to Mufasa. He explains what happened, and Mufasa gives his grandson some sagely advice about not doubting himself. He leaves by telling him that how he deals with defeat is just as important as how he deals with victory.

Paintings of Mufasa can be seen during Wisdom on the Walls.

After what happened to Mizimu Grove, all of the Pride Landers get upset and are thinking about leaving. Kion asks Mufasa what he should do. He claims that Kion is a good leader for understanding the Pride Landers when things are difficult. He then tells him that it is possible to find hope even on the darkest days.

When Kion doesn't know if he can defeat Scar he talks to Mufasa. He says that Kion shouldn't fight fire with fire. When Scar tells Ushari how he got his scar when he Led the Guard that Mufasa nicknamed him Scar.

Friends to the End

Mufasa is mentioned when Kion considers talking to him to ease his doubts. However, he decides against it upon seeing his reflection, not wanting his grandfather to see him while he looks like his brother Scar.

Mufasa is mentioned by his grandson when he and the newly appointed queen Rani talk about Mufasa's evil brother Scar, and his betrayal against him.  Kion later reconnected with Mufasa, for the first time since their final battle against Scar.

The Lake of Reflection

Kion says that he's ready to give back the Roar. Mufasa says that he never had the Roar and Kion must give it back at Cikha Escarpment.

Kion talks to Mufasa about whether or not he should stay at the Tree of Life with Queen Rani.

Mufasa appears in the night watching his reunited family at Pride Rock. He later appears in the clouds with Janna and Askari, proudly watching the wedding between Kion and Rani, now both ruling the Tree of Life as King and Queen and with the Roar of the Elders finally return as destined to its original home at the Tree of Life, restoring the Circle of Life. 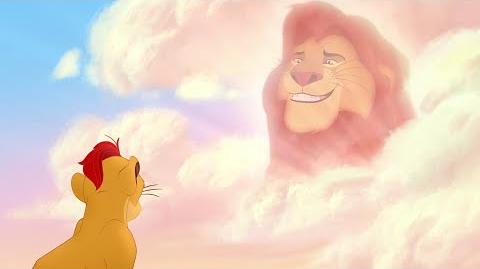 Mufasa's Advice - Return of the Roar 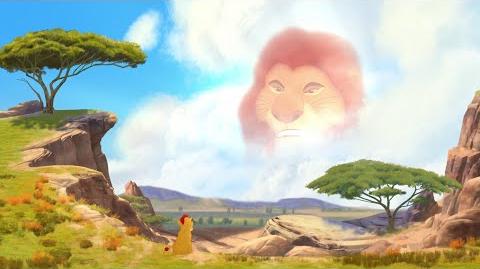 Mufasa's Advice - The Rise of Makuu 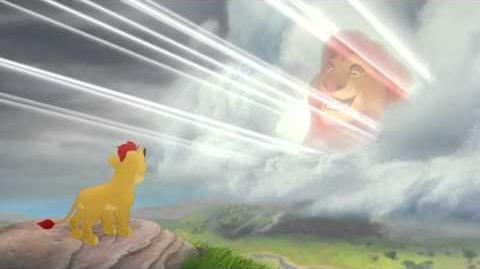 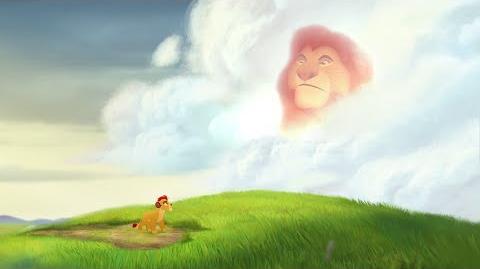 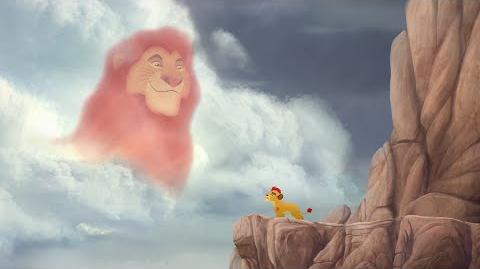 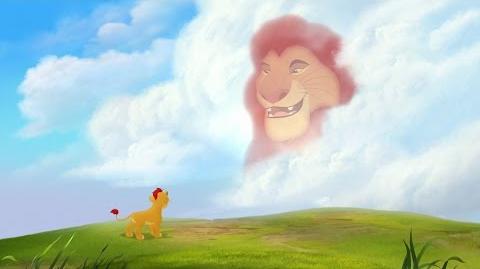 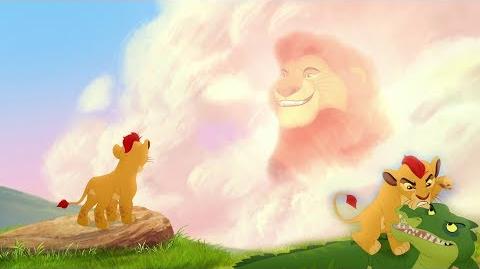 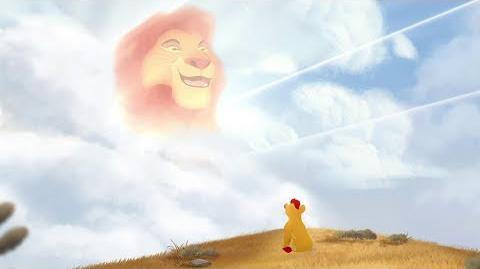 Mufasa's Advice - The Rise of Scar

Simba and Kion talk with Mufasa about Scar

The Lion Guard - The Lake of Reflection, Kion talks to Mufasa

The Lion Guard - Journey to the Pride Lands, Kion talks to Mufasa and Rani