Start a Wiki
watch 01:27
The Loop (Movies)
Do you like this video?
Information
Gallery

Mjomba's Pack is a pack of aardwolves that lives in the Pride Lands.

Mjomba's Pack is blasted out of the Pride Lands when Kion roars at them, thinking that they are hyenas. They hide behind a rock in the Outlands until Ogopa spots the Lion Guard. They watch them, and Mjomba thinks he spots a bug, which he follows. The rest of the pack flees the Guard, leaving Mjomba behind. Bunga catches Mjomba, running in the opposite direction as the rest of his pack. Eventually, he agrees to help them and lead them to the pack.

The other aardwolves take shelter in a den. Soon, they are welcomed by Reirei and Goigoi the jackals, who sing the song We'll Make You a Meal with them to win their trust. Later on, Mjomba enters the den and tries to explain that what Kion did was a mistake. However, it turns out that the jackals want to eat them, and they begin chasing the aardwolves around the den after Goigoi pushes a rock over the entrance.

The Lion Guard pushes aside the rock and defeats the jackals. They then lead the aardwolves back to the Pride Lands, where they send Bunga a thank-you package of termites.

Haya is a nervous and shy aardwolf. Like the rest of the pack, he adores termites. He is logical and observant but is fooled somewhat easily.

Ogopa is a bright and cheerful aardwolf. Like the rest of the pack, she adores termites. She is easily frightened and has a tendency to jump to conclusions. She also tends to add afterthoughts after she states her opinion on a subject.

The following are known members of Mjomba's Pack who have not received official names. 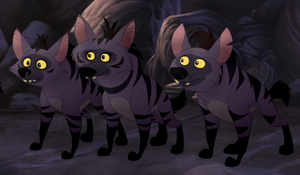 Add a photo to this gallery
Retrieved from "https://lionguard.fandom.com/wiki/Mjomba%27s_Pack?oldid=322830"
Community content is available under CC-BY-SA unless otherwise noted.