The following is a list of prototype merchandise released for The Lion Guard.

The earliest images used as stock photos contained prototypes of each figure. The eyes of the earliest prototypes were noticeably smaller. Also the colors of the figures were brighter and the mark of the guard on all members was to be painted in their original colors not with invisible colors as seen in the final version that got released. though the diffrences re mall they are there

The two figures that were released at a later date (Janja and Fuli) both had 3D printed models shown at Toy Fair New York. Fuli had been listed on the german amazonsite, but even though she could be purchased unfortunately was scrapped very late, thus not making her purchasable.

The figures used to advertising the book are much higher quality prototypes. 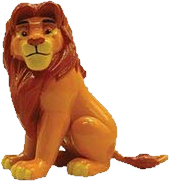 Many of the stock art images shown on the boxes are prototypes. In addition to this, some prototypes were shown at Toy Fair 2017. Kiara's colors changed in the final version of her. The roaring Kion was supposed to have open eyes, but the final one has them closed. 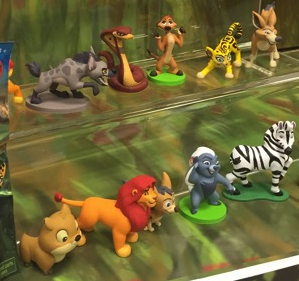 Some stock art photos show much older prototypes of the villain figures from Just Play. Janja had colors that were closer to a lion king hyena look. Ushari got a darker skincolor. Reirei got a darker furcolor as well.

Some websites listed prototype images of the single figures before the finalized versions were available. Kion had incorrect coloring around his eyes and stomach fur. Bunga is missing his three cheek spots in the final version. Beshte and Bunga's prototypes both lacked the mark of the guard.

An early look at the Jasiri figure found at the Toy Fair 2017 suggests that the second figure in the Poseable Figures would be poseable, too. The colors were also more faithful to the hyenas from The Lion King.

This was originally just a Pride Rock playset. The original prototype was larger in size and also ressembled more the season 3 location Cikha Escarpement than Pride Rock, therefore naming it incorrectly.

Protoypes for the were found on Amazon as stock art, showing a very early model.

A later model was found at Toy Fair 2017, which lacked the electronics.

A more recent stock art shows another prototype, which appears to be the final model, only much more polished.

The early cover was different from the final one.

The early cover was different from the final one.

The book cover was changed up two times before it got its final version.

The final and prototype cover are the same.

The early cover was orange, but the final version is green.

The final version differs very much from the prototype one. Instead of being set in the jungle the final version of the cover is a picture of the Pride Lands. All members have the old design of the mark of the guard on their shoulders. In the early design Fuli had blue eyes.

The early cover lacked Ono and Fuli, which both were added into the final version.

The prototype had concept art design of the characters. Seen because of the blue eye color for Fuli, Kion looking more like Mufasa and Beshte having a notch in his ears.

Return of the Roar

The cover changed two times before it got its final version. In the first cover Fuli was seen close by Kion and having blue eyes. Kion had his old mark of the guard in the form of a lion paw on his shoulder.

The cover changed three times before it got its final version. In the first version Chungu was depicted on the cover, this is however incorrect, because it stars Jasiri, a friendly hyena, who becomes friends with Kion.