The Lion Guard Wiki
Register
Don't have an account?
Sign In
Advertisement
in: Pride Landers, Ostriches, Groups,
and 2 more

Mbuni's Flock is a flock of ostriches led by Mbuni that live in the Pride Lands.

Can't Wait to be Queen

Mbuni's Flock can be seen during "Duties of the King."

Mbuni's flock is first seen during the mudslide. With a large pile of mud sliding towards them increasing velocity, they panic and run around in circles while Simba and the Lion Guard save their eggs from falling off a steep cliff. Although it was a struggle, they manage to save all of the eggs from falling. With the eggs safe, Mbuni and her flock finally calm down. She approaches Simba and thanks him for his deed, telling him she feels honored to have the king of the Pride Lands save her eggs. She and her flock then bow to the King. Later, Swala and her herd stampede across the Pride Lands. Once again, Mbuni and her flock scream and run around in circles. Fuli runs ahead to calm them down while Ono calms Swala's herd. Ono advises Fuli to be 'soft and soothing' while speaking to the ostriches, to help calm them down. When she gets there, she tries to speak soft and soothing as instructed. When it doesn't work out, she screams at them and they calm down right away.

Mbuni's flock can be seen briefly when Ono flies up to see if Mtoto's belief that Ma Tembo is on her way to Pride Rock is correct.

When the guard is chasing a dust devil they've notice that the flock have become trapped in a gully, with sand enveloping all but their necks and head. As they begin to dig them out, Goigoi arrives, his body covered in red berry juice to resemble stripes. While they've been focusing on the flock they didn't notice the jackal nearby. When they do, Goigoi continues to believe that he is invisible due to the stripes, even though he is clearly visible to them. He moves around a bit, still keeping the 'illusion' that he's invisible, and threatens to attack, when Beshte tackles him away.

Mbuni is the the leader of the flock. She is an ostrich with black and white feathers, a long, pale pinkish white neck, and dull grayish pink legs. She has large, round blue (and sometimes brown) eyes. She is quick to take advice despite how poor it may seem, and has confessed to being afraid of hyenas. 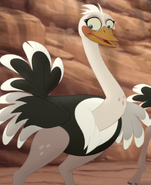 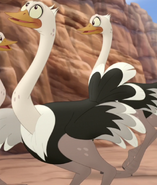