The Lion Guard Wiki
Register
Don't have an account?
Sign In
Advertisement
in: Groups, Pride Landers, Primates,
and 3 more

Laini's Group is a group of galagos that reside in the Pride Lands.

Whilst on a patrol, Ono alerts the Guard to the cries of Laini and two members of her group, and Fuli rushes ahead to assist them.

She manages to catch them, just before they can fall out of a tree, and the galagos respond by nuzzling her appreciatively, prompting Fuli to request assistance in prying them off her, to which Bunga complies.

The group appears briefly during Life in the Pride Lands.

The Trouble With Galagos

The The Lion Guard are relaxing at Hakuna Matata Falls, when suddenly they are ambushed by Laini's frenzied group. They grasp onto Fuli and Kion with fear, although they are too distraught to tell the Guard exactly what has happened. When Kion manages to get Laini away from his muzzle, she explains that a leopard has moved into their tree. After a dispute as to whether there are leopards in the Pride Lands or not, Kion agrees to check it out. The galagos wish to stay with the Lion Guard, but Kion is adamant that they will be safer staying behind. When Fuli manages to get the two galagos away from her ears, she also hears this news. When Ono informs Kion of a distressed giraffe, Laini becomes slightly hysterical at the thought of Kion ignoring their problem. Kion promises her that he will take care of the leopard after he has dealt with the giraffe.

Shortly after the Guard have helped Shingo, Laini reappears with her group, frightened once more. She tells them how they heard a 'pfft' sound, followed by an awful smell. Bunga comments that it was likely his uncle Pumbaa and Beshte adds that Pumbaa would never hurt them. Despite Kion telling them to go back, they insist once again on joining the Lion Guard.

Back at the galagos tree, the Lion Guard spot the sleeping leopard. The galagos are told to wait behind whilst they deal with the leopard. Laini reminds Kion that the leopard is fierce, but Kion reminds her that so is he. After getting him down, the leopard, who introduces himself as Badili, explains how he never intended any harm to the galagos, nor did he realise the tree belonged to someone else. He asks if they could share the tree, but Laini adamantly refuses. The Guard agree to take Badili back to Mirihi Forest, and the group of galagos joyfully scamper back up their tree.But the next day, the galagos return with the same problem. The Lion Guard decide to try a different approach, in order to get Badili out of the tree permanently. After training him to be more assertive, the galagos are able to return home. Once the Lion Guard have dealt with the leopard, Kion, Fuli, Beshte and Ono return to Hakuna Matata Falls. Laini appears here again, with mention that someone is in their tree once more. The Guard return to their tree, only to find Bunga nestling with three galagos. When questioned what he's doing, Bunga exclaims that he just had to come back because they were so cute and snuggly. He leaps down the tree and grabs Laini, giving her a hug. When the hug is too tight, Laini comments that maybe the leopard wasn't so bad after all.

Laini and a couple of other group members watch The Traveling Baboon Show from a tree. A few of the members also end up being part of the show, where the baboons use them as part of a disappearing trick.

As the Guard patrols the Pride Lands, Kion protects Laini, and several members of her group from Janja . Later, they are amongst the gathered Pride Landers as Ma Tembo searches for a water source.

Some of Laini's group are disturbed as Mzaha headbutts their tree during Three of a Kind, followed by Chama who rushes past.

Laini's Group are seen briefly during "The Worst Hyena We Know".

Laini and two of her group members are trapped in a tree. Beshte lifts the tree up, while Bunga reaches in and grabs two of the galagos from an opening in the trunk. He grabs a bug next, so Fuli reaches in to save Laini. She thanks the Lion Guard, who, having done their duty, the Lion Guard continue their patrol, with Bunga warning the galagos to watch out for falling trees.

When Kilio Valley is set ablaze by Scar, Kion turns to Laini for help, hoping that she will allow Ma Tembo's herd to stay there for a while with them in Ndefu Grove. Laini gladly accepts, but the rambunctious elephants cause the ground to shake with their movements, and their bodies constantly slam on their trees, resulting in the galagos falling to the ground. Kion agrees to find somewhere else for them to stay.

Later, when Ndefu Grove is set alight (likely due to the Dry Lightning), Laini begs the Lion Guard to save her galagos, who are trapped in a tree. They do as asked, getting the galagos to leap on their back before taking them to safety. With the fire still burning, Kion turns to Ma Tembo's herd, who return to assist the galagos and save their grove. Laini, touched by how the elephants saved their home despite being turned away from them, asks Ma Tembo's herd to stay with them. They accept the offer, and the galagos start to climb Zito's trunk, getting to know their new neighbors.

Laini's group is in a tree and are scared to get down because of a serval is in it. Shujaa decides to help them he lifts the other side of the tree to let the serval down. He accidentally swings the galagos to another tree.

When Fuli questions Boboka on the reason for a stampede, Boboka explains that someone had saw a jackal, before bumping into a tree, which sends Laini and her galagos to the ground. Laini anxiously repeats Boboka, and orders her galagos to scatter. The galagos become underfoot of the stampeding antelope, and Kion tells Bunga to round them up. Bunga does so and returns the galagos to their tree. Laini gratefully thanks him.

Later, the Lion Guard decides to assemble the Pride Landers, in order to prepare them to fight against Scar and the Outlanders, Laini and her galagos eagerly volunteer.

When the animals gather at Pride Rock, despite Ma Tembo’s Herd, Bupu’s Herd, and Mbeya’s Crash being startled by the presence of the others, Laini and her galagos are eager to learn how to work together, and defend themselves and the other Pride Landers. Upon seeing them, Bupu irritably protests. Fuli quietly expresses doubt to Kion, and Kion states that the galagos were Pride Landers, and they couldn’t be much trouble.

Laini attempts to order Bupu, and is stopped by Ma Tembo. Laini protests, and Kion questions her. Laini explains, and Kion states that he’s noticed that the galagos are very fast. Laini eagerly confirms his statement, and Kion asks if the galagos could run in the same direction at the same time. Laini agrees, and Beshte states thw importantance of staying calm. He suggests doing a pretend hyena attack, which startles the rhinos. Beshte attempts to calm them.

Kion and Fuli explain a training exercise to the group, and the galagos are the first to begin the task, running to Bunga, while the other animals become entangled in each other. The galagos unintentionally become underfoot of the other animals, and are the first to reach Bunga. Fuli irritably questions the animals, and Bupu blames the galagos on the mishap. Kion decides to enlist the help of Pride Landers that are experienced at working together as a team.

Makuu‘s Float attempts to train the group, but are unsccusssful to to the differences between them. Makuu gives up, and tells Kion that the crocodiles will defend their territory their own way, and the others can do the same. Later, when the Army of Scar attacks Makuu‘s watering hole, Laini, her galagos, and the other animals instantly agree to come to their aid.

When they reach the watering hole, Laini and her galagos wait on a rock, until Kion sends them and Bupu to help Ma Tembo‘s Herd. Laini and her galagos become underfoot underneath the jackals, which enables Bupu to kick them away. Once the Army of Scar has been defeated, Makuu gratefully thanks the animals, and states that the crocodiles will come to the aid of any Pride Lander in trouble.

Laini's group watches as Dhahabu and her herd go up to Pride Rock. They also sing and dance along to "Prance With Me."

Laini's group watches as Timon and Pumbaa put on a show at Mizmiu Grove for Makini's Mpando Mpaya. Soon the Army of Scar comes to the party as uninvited guests. The Pridelanders work together and battels them. Soon Scar reveals himself and explains his plan to the Pride Landers. Everyone starts to panic and run while the Lion Guard calms them down. The sable antelopes and galagos head towards Poromoko Crevasse Fuli tries to slow them down. Bupu knocks Fuli off the cliff but she's okay and is glad that she remembered to say "please." Once the herds are calm everyone is not happy and are scared they claim that they want to leave. Simba feels bad for not telling them but he says he did it for a good reason. The next day everyone meets at Pride Rock for an annoucement. Kion tells everyone to come back to Mizimu Grove and he shows them Makini's baobab tree. Everyone decides to stay in the Pride Lands and watches the young mandrill plants her tree.

Laini's group helps the Pride Landers fight Scar's army. They also say goodbye to the Lion Guard as they may their way to the Tree of Life.

Laini is a skittish galago who is the leader of the group, as well as the most vocal. She has a lot of faith in the Lion Guard, and looks to them for protection when she needs it. Laini is quick to worry about any possible problem that may arise. 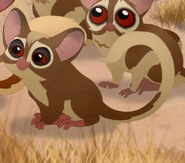 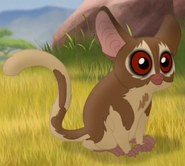 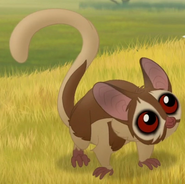