The Lion Guard Wiki
Register
Don't have an account?
Sign In
Advertisement
in: Outlanders, Groups, Hyenas,
and 2 more

Jasiri's Clan, also known as The Hyena Resistance, is a clan of hyenas that live in the Outlands. It has at least twelve members, four of whom are named. The leader of the clan, Jasiri was featured in the episode Never Judge a Hyena by Its Spots and the clan itself first appeared in Lions of the Outlands. Unlike Janja and his clan at first, Jasiri's clan respects the Circle of Life and mainly partakes in it by scavenging from other predators' leftovers instead of eating live animals which often led to conflict between Janja's clan. However, Janja's clan eventually reforms and unites with Jasiri's clan in "Battle for the Pride Lands". As of Season 3, the clan are now the rulers of the Outlands.

Never Judge a Hyena by Its Spots

Jasiri was the first member of the clan to be seen. When Kion lost his way into the Outlands, he came across the female hyena. While initially distrustful of her, they learned to trust one another and Kion learned that not all hyenas are bad like Janja and his clan and they have more in common then he suspected. Jasiri guided him through the Outlands back home but was attacked by Janja and his clan. Kion joined the fight and managed to drive them off by using the Roar of the Elders. The two then separated with Kion returning with the rest of the Lion Guard to the Pride Lands and her going back into the Outlands, presumably back to her clan's territory.

Lions of the Outlands

Jasiri made her way into the Pride Lands in order to ask Kion for help, as pride of strange lions living in the Outlands had taken over her clan's watering hole, and refused to share it. Kion, thinking this was just a misunderstanding, followed her into the Outlands to Jasiri's territory, much to the surprise of her sister Madoa, who had her doubts about Kion and lions in general. The cubs of the clan, Wema, and Tunu, are also afraid of lions, as they only know the pride that took over their watering hole. Kion assures them that he can convince the lions to give them their watering hole back and that they likely are unaware that good hyenas exist and thus it is just a misunderstanding. Later, when Kion drives away Zira and the Outsiders, Jasiri's Clan are free to return to their watering hole. Madoa thanks Kion and reveals that she is now glad that Jasiri has a friend like him, and Jasiri comments that she's glad to have the entire Lion Guard as her friends. Although despite Kion's geniality, the pups are still shown to be afraid of Kion, which Jasiri comments, saying Kion should take it as a compliment for his ferocity.

While looking for the jackals Janja, Cheezi, and Chungu come across Jasiri who informs the trio that they forgot to remark their turf for the Dry Season, and that it's part of her territory now. She allows them to pass through, but a fight breaks and Jasiri manages to drive them off.

A little later, she is seen playing with her Madoa along with the cubs Wema and Tunu in a game of hiding and seek until she and the cubs get attacked by Janja's clan. Jasiri does her best to defends the cubs but the trio gets knocked into a lava geyser. Madoa who, unbeknownst to Janja, has seen everything that happened and runs off to seek the Lion Guard's assistance. She makes it to Pride Lands to tell them that her sister and the cubs are in danger. The team heads off but it is difficult with some Tsetse Flies blocking their path, so they ask Thurston to come with them. Once they make the Outlands, they find where Jasiri and the cubs are held and everyone starts to distract the hyenas, while Kion devises a plan. Beshte is able to push a stone slab into the lava geyser which allows the three to get out. Seeing that his plan has failed, Janja is the last one to retreat with his clan back, deeper into the Outlands. When everyone is safe Jasiri admits that she is a little concerned over Janja's attack, seeing it as something more than a fight for territory, but Kion consults her saying that the heat of the dry season makes some animals do crazy things. She and the pups thank their friends for the rescue and return home.

Jasiri arrives in the Pride Lands to see the guard handling more enemies than usual and after exchanging greetings. She learns from Kion that Scar has returned in the Outlands Volcano, seeing that her clan wasn't safe the cub offers for them to live in the Pride Lands but Jasiri had another idea. Rallying her whole clan Jasiri announces that they'll set up a resistance to help the Lion Guard but when clan seems hesitant to do so. She encourages them to stand up and defend their home with that they begin to spy on Scar's Army hearing that they're all heading back to Kilio Valley. Jasiri sent Madoa to inform the guard while they stopped Janja by causing a rockslide to block their path and they continue to stop the army's advances every time which Kion thanks them as a big help

In the attempt to get rid of the resistance Scar had his minions feed Jasiri and her clan false information which is delivered to the Lion Guard. Soon the resistance was attacked by Janja's clan, Reirei's Pack and Kiburi's Float ​​​​​but they managed to hold them off until Kion and his friends arrive. After the army was blown off by the roar in defeat, except Janja who fell in the lava pit before being saved by Jasiri and ran off for the army, seeing that Scar now knows about her whole clan, he once again offers for them to live in the Pride Lands. But the clan decides to stay in their home knowing that Scar can't catch them if he can't find them as they go deeper into the Outlands to hide but will continue to aid the guard.

When King Simba says it's time to defeat Scar once and for all Jasiri says she'll round up her clan. Later while the clan is sleeping Janja comes into her clan's territory and says that the Lion Guard is in trouble. The next morning the clan helps the Pride Landers fight against Scar. Once defeated  Jasiri becomes in charge of the Outlanders.

Jasiri and Janja come to the Tree of Life and brings Kion and the Lion Guard back home to stop the Outsiders.

When the Lion Guard return to the Outlands, the rest of Jasiri's clan reunite with the group, and launch an assault on the Pride Lands to stop Zira. However, it turns out that Zira has completed her journey through the Circle of Life. Several members of Jasiri's clan show up at Kion and Rani's wedding.

Jasiri is the first member of the clan to be introduced, and is later revealed to be the clan's matriarch. She is a fairly small and slim spotted hyena, though she displays strength when fighting Janja's clan. She has grey fur that bears a slight purplish tint. Unlike the hyenas Kion had previously met, Jasiri respects the Circle of Life and partakes in it by scavenging what other predators such as lions leave behind. She is very spunky and lively and has been described by her voice actor as zany and opinionated. She is shown to be a bit teasing and sassy, not to mention confident in her fighting skills.

Madoa is Jasiri's sister. Her color scheme is largely the same as Jasiri's, though her spots slightly resemble stripes. She is skeptical about Kion and lions in general but isn't afraid to admit that, while she had her doubts, Jasiri's trust in Kion was not misplaced. She is also shown to be very nurturing, as she is shown to be protective and concerned about the cubs in the clan.

Wema is one of the cubs in Jasiri's clan.  Wema is a very shy hyena cub who is afraid of lions, both Outsiders and Pride Landers like Kion. She is shown to be very playful when interacting with her brother Tunu.

Tunu is one of the cubs in Jasiri's clan.  Like his sister, Tunu is a very shy hyena cub who is afraid of all lions from both the Outlands and Pride Lands, even after Kion exerts warmth towards them. He is shown to be very playful, often following his sister everywhere.

Janja was initially greedy, trouble-making, and aggressive. He despises the Lion Guard, especially their leader, Kion, and his Roar. In "Battle for the Pride Lands" Janja changes sides and helps them defeat Scar and later joins the clan as Jasiri's enforcer.

Cheezi is a crazy hyena  He isn't very smart, similar to his companion Chungu, but is slightly more devious and enjoys violence. Also like his friend Chungu, he is very loyal to Janja and hates being away from his side for any length of time. Cheezi and the other members of his clan soon join Jasri and her clan.

Chungu is fairly thick-skulled and is submissive towards the clan leader, Janja. He frequently compliments Janja whenever his leader makes a joke. Chungu and his cohorts later join Jasiri's clan.

Nne is a cunning hyena. He is incredibly clever, and his intelligence exceeds his own leader. He has short patience with those not on his own level, though he will keep them around until they are no longer useful to his schemes. He is over-confident, which proves to be his own downfall. Nne, along with Tano, rejoin Janja's clan after their intial betrayal of him and they later all merge with Jasiri's clan.

Tano is a devious hyena and one of the smarter hyenas, and his intelligence exceeds his own leader. He is somewhat sardonic. Like his friend Nne, he overestimates his own cleverness which is his true downfall. Tano soon joins Jasiri's clan following the war against Scar's spirit. 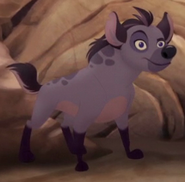