It's UnBungalievable! is an educational short that is featured at the end of The Lion Guard episodes.

They are approximately two and a half minutes long and feature the Lion Guard's bravest and keenest of sight, Bunga the honey badger and Ono the egret. In each episode, Bunga will choose a winner, based on his own opinion. While Bunga comments and jokes on the animals, Ono shares interesting facts about the animals to Bunga and the audience to help Bunga in his decision.

Each two and a half minute special educates viewers on many different types of animal species.

Disney Junior and Disneynature present the short-form series It’s UnBungalievable, an extension of The Lion Guard, premiering Saturday, January 9 (9:52 a.m. EST). Hosted by The Lion Guard’s animated characters Bunga the honey badger and Ono the egret, It’s UnBungalievable is a nature show offering fun facts about animals and their habitats. Each episode features live-action wildlife footage from Disneynature and highlights two animals, chosen by Bunga and Ono, to compete in various categories such as Who’s Quicker?, Who Has Better Hair? and Who’s Hungrier?[1] 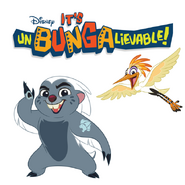 Promotional image featured in the Disney Junior app.
Add a photo to this gallery

Retrieved from "https://lionguard.fandom.com/wiki/It%E2%80%99s_UnBungalievable!?oldid=335275"
Community content is available under CC-BY-SA unless otherwise noted.