Fuli Finds Her Place is a book inspired by The Lion Guard. It was released on 28th June 2016.[1] It is based on the episode Fuli's New Family.

At the end of the day, everyone in the Lion Guard is ready for family dinner-everyone except Fuli, who hunts all alone. Her friends are worried about her. Wouldn't she rather eat with the egrets, hippos, or lions? The Lion Guard is on a mission to find a new family for Fuli!

With a mudslide causing a possible threat to a herd of buffaloes, the Lion Guard tries to move the animals to dry ground. Fuli races ahead of them and succeeds.

When one buffalo gets stuck in the mud, Bunga frees him but the force of the push sends him flying into a bush, where Ushari bites him. The Lion Guard quickly takes him to Rafiki's tree, but Rafiki tells them that honey badgers are immune to snake venom, causing Bunga to believe that he is immune to everything.

Since all but Fuli have other plans, Timon and Pumbaa invite Fuli back to Hakuna Matata Falls for dinner, with Timon claiming that friends don't let other friends eat alone. When they arrive, Bunga places himself inside the mouth of a crocodile, certain that he can't be hurt. Fuli saves him before leaving.

The other members of the Lion Guard start to question if they're really good friends to Fuli. They decide that Fuli should never be alone, and split up to look for her.

Kion, Fuli, Nala, and Kiara track a herd of Gazelles for a long time, but when Fuli leaps, Nala calls her back, since they were just practicing. Still hungry, Fuli wishes to be alone.

Meanwhile, Bunga bounces a porcupine on his head, still believing to be immune to everything. The porcupine suggests that he played in a volcano and Bunga decides to do just that, even though the porcupine was joking. When he arrives at the Outlands Volcano, Bunga is unaware that Janja, Cheezi, and Chungu are watching him nearby.

When Bunga cries out that he's immune again, Fuli hears him in the Outlands, as do the rest of the Lion Guard. Fuli arrives just in time to save him from being eaten. The pair land on a ledge in the lava, which can't support their weight. When the lava hits him, Bunga realizes that he's not immune, just as the rest of the Lion Guard arrive. Kion orders Beshte to knock down a tree, so the pair can walk over to safety.

Back in the Pride Lands, Fuli confesses that she doesn't know what she would have done without them. While Beshte and Bunga embrace her for a hug, Kion states that they always come through for each other.

Differences from the Episode 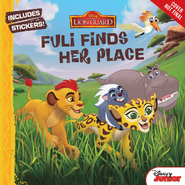 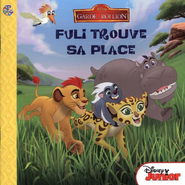 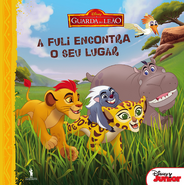 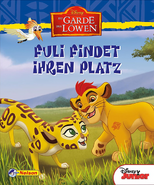 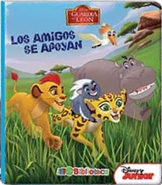 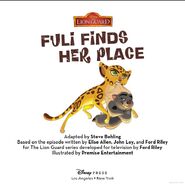 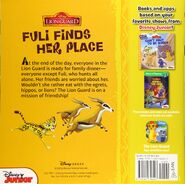 Retrieved from "https://lionguard.fandom.com/wiki/Fuli_Finds_Her_Place?oldid=233446"
Community content is available under CC-BY-SA unless otherwise noted.