View source
watch 02:07
Spider-Man: No Way Home Trailer Dropped - The Loop
Do you like this video?
Play Sound

January 2016
The Defend the Pride Lands Play Set is a large playset inspired by The Lion Guard.[1]

It includes an exclusive Kion figure. There are also stand up stickers of Janja and Bunga.

Fans of the new Disney Junior series, The Lion Guard, can help the leader Kion protect the Pride Lands with the new Pride Land Play Set. Little Lion Guards will love exploring all the exciting features and accessories, including an exclusive Kion figure. Kids can test out the boulder launcher to keep adversaries away, use the secret leaf trap door to stop intruders and capture any unwanted guests with the bone trap! A vine lift helps Kion easily get up to his look out perch to keep an eye on the Pride Land. In his downtime, Kion can play in the fun, working waterfall! Collect the rest of the Lion Guard figures to add to the adventure! For Ages 3+

A special edition was released exclusively for the Disney Store. It is packaged in a different box instead of the exclusive Kion figure and includes blind bag figures of Kion, Fuli, Bunga, Beshte and Janja. 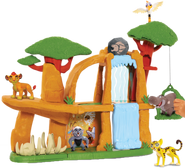 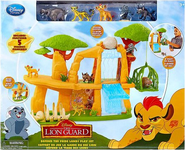 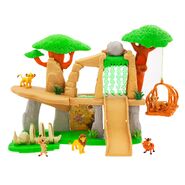