View source
watch 01:25
Jurassic World: Dominion Dominates Fandom Wikis - The Loop
Do you like this video?
Play Sound
This article is about the book. For other uses, please see Bunga the Wise (disambiguation).

Bunga the Wise is a book based on an episode of The Lion Guard.

Reading is fun in this exciting Level 1 World of Reading story based on an episode of the upcoming Disney Junior animated series The Lion Guard.

Kion's best buddy Bunga the honey badger is always ready for an exciting adventure. And this adventure is big — maybe bigger than he can handle!

Kion's best buddy, Bunga the honey badger, is the bravest (and sometimes craziest) animal in the Pride Lands. When Rafiki says that honey badgers can be smart as well, Bunga accidentally causes chaos throughout the Pride Lands after he offers bad advice to all of the animals. Join Bunga, Kion, and the rest of the Lion Guard in this un-Bunga-lievable adventure![1]

The Lion Guard are out in a storm trying to save some baboons. Bunga manages to scare them down by farting loudly in the tree. Kion then goes to speak with Mufasa as he considers the possibility of just using the Roar of the Elders to blast the rain away. However, Mufasa reminds him that the Pride Lands needs that water, and that a quick solution isn't always the best.

Soon, the Guard find themselves in a small river, and Ono finds out that the river is flooding. Bunga has an idea, and gets Beshte to push a rock into the water near some other rocks to block the water. It does and, when Bunga sees a leak, he pushes a stick in to sort out the problem. Kion isn't so sure that the plan will work. Rafiki tells everyone that 'honey badgers are the smartest animals' and Bunga rushes off to tell everyone. However, once Bunga has gone, Kion hears Rafiki finish his sentence with 'when they think first'.

When the rest of the Guard approach Hakuna Matata Falls, they see a large line of animals queueing up to see Bunga. Timon calls for everyone to get in line to see 'Bunga the Wise' whilst Pumbaa watches. Kion enters the tree and asks what's happening, and Bunga explains that he can help other animals.

Fuli is skeptical, though Beshte remains optimistic. But soon, they find themselves chasing down animals that have been given bad advice. They help an ostrich retrieve her head from the ground after Bunga has given her advice on how to avoid seeing hyenas. Then, Beshte saves the bushbucks from eating pink flowers, which Bunga had told them were the most delicious when in fact they would make them sick.

Kion returns to Bunga and informs him that his bad advice is causing more problems, when suddenly the dam bursts. The animals run into a canyon, but when Bunga is asked for a solution, he can't provide them with one and instead tells them to turn to Kion. Kion calls for everyone to get behind him, and he unleashes a huge roar which stops the water.

The animals return to a pool that has opened up thanks to the roar, as Bunga prepares to dive in a mud patch. Just as he does so, Rafiki reveals the rest of his words. Bunga admits that maybe he's not so smart after all, and that he can live with that. 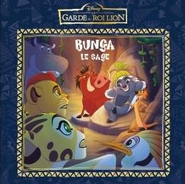 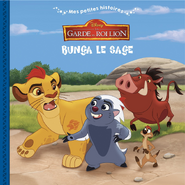