The Lion Guard Wiki
Register
Don't have an account?
Sign In
Advertisement
in: Groups, Baboons, Pride Landers,
and 4 more

Big Baboon's Troop is a group of baboons led by Big Baboon that live in the Pride Lands.

Big Baboon's Troop chases Fuli, for reasons unknown at first. They trample over Bunga in their pursuit, trying to catch the agile cheetah. Eventually, they wind up smashing into Beshte, who was set up to block the baboons by Kion. After thanking them for the help, Fuli turns to the troop and apologizes for saying that they looked funny when they scratched their heads, assuring them that she wasn't trying to be mean by saying it. Big Baboon peers up at her, telling her that her apology has been accepted before falling flat on his back.

Big Baboon's Troop comes to Pride Rock when Makuu's Float moved to Big Springs, much to the irritation of the guard and Kiara. Later, after crocodiles are forced out of Big Springs the baboons back in their forest.

The troop have climbed up a slowly breaking tree in order to stay dry. When Kion asks him and the rest of the baboons to come down, he refuses, stating that they are dry up there. He then assures his troop that as long as they stay dry, everything will be okay. However, Ono points out that the tree is breaking, and a female baboon in the troop confirms the egret's words as true.

Desperate to get them down as Beshte struggles to keep the tree up, Kion sends Bunga up to get them down. Bunga does so, and lets loose a blast of flatulence directly into the troop, causing everyone to leap off the tree. One baboon nearly rolls off the edge of a nearby cliff, but Kion is able to catch him by the tail. Gumba is separated from his mother during the fall, but Ono reunites them before he can fall. Big Baboon lands safely on Fuli with another baboon. But When she asks if he plans on getting off, he informs her that he will only get off once it stops raining.

The troop are called down from Big Baboon Tree by Fuli, who believes she has one of their children. Big Baboon explains that the child is not theirs and that he belongs with a neighboring troop who live in a cave on Mapango Cliffs. Fuli turns to leave, but Big Baboon calls her back, asking if she could deliver a message to them when she gets there. She questions what it is, and the baboons start pelting her with fruit. Fuli departs with annoyance, and Big Baboon calms down, asking whose turn it is to pick up the throwing fruit. When the rest of the troops point towards each other, he states "baboons" in annoyance.

Big Baboon and his troop make a small appearance when Kifaru accidentally charges their tree and the baboons scatter landing on some of the Lion Guard.

Big Baboon's Troop follow Ma Tembo's Herd as they search for water. When Janja's Clan attack, they follow the elephants to a dead end, where the Lion Guard takes care of the hyenas for them. They stay with the elephants until Ma Tembo is finally able to find a new water source for the Dry Season.

Bunga wants to put on a special show for his uncles. With the Lion Guard and some other animals helping they perform "The Twelve Ways of Christmas" the baboons are "10 baboons burping"

When the Lion Guard goes to stop the Army of Scar. Kion suggests cutting them off by making a path through Nyani Grove. Shujaa, starts knocking down trees and the baboons come flying out of them.

While Fuli, Tiifu, and Zuri show Queen Dhahabu around the Pride Lands. They introduce her to baboons who are leaping over a disgruntled Fuli. However, Reirei's Pack scares them away.

Big Baboon's Troop says goodbye to Fuli and the Lion Guard as they make their way to the Tree of Life.

Big Baboon's Troop (along with Baby Baboon's troop) can be seen hanging on to Fuli and Azaad.

Big Baboon is the leader of the troop. He has a giant off-white fluffy mane around his neck and some hairs on his chin. Big Baboon has some questionable actions, such as keeping his troop in a falling tree all in a bid to stay dry. He is very stubborn.

Gumba is an infant in the troop. He has a close friendship with Mtoto, Shauku, Kambuni and Kwato, and enjoys playing with them a lot. Gumba is shown to be fairly laid back, and sometimes a bit blunt in his statements. 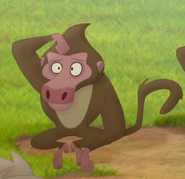 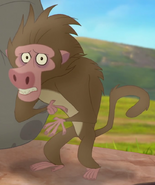 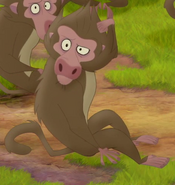 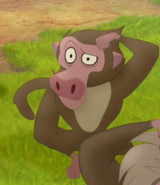