Babysitter Bunga is a book inspired by The Lion Guard.[1]

The Lion Guard is stunned when Bunga becomes the go-to babysitter for all the Pride Lands parents. His babysitting style is highly unorthodox, but when his young charges are threatened, they use all the fun things Babysitter Bunga taught them to fight back against the jackals - and win!

The Lion Guard are out on patrol when they notice Reirei's pack in the Pride Lands attacking a zebra herd. The Guard race to save the zebras, but Ono notices that two jackal pups, Dogo, and his sister Kijana are separating a baby zebra from the rest of the herd.

While the rest of the Guard attack the adults, Ono and Bunga race over to assist Hamu. They take down Dogo's sister, but Dogo pounces on Hamu. Bunga cries out for Hamu to kick and he obeys, sending the other jackal flying. Bunga commends the young zebra for his success.

After chasing all of the jackals back into the Outlands, Hamu's mother, Muhimu, is still nervous after the whole ordeal. Beshte suggests that she takes some time out for herself, but Muhimu asks what she would do with her son. She turns to see Hamu playing happily with Bunga, and asks if he can stay with him. Bunga doesn't see why not and decides to take him back to Hakuna Matata Falls.

Muhimu heads to the Watering Hole to relax, alongside some other mothers. Her friend Twiga calls out for her daughter to avoid the porcupine in case she gets hurt, but then notices Hamu's absence. After asking where he is, Muhimu informs her that Bunga is babysitting for her, which makes the other parents wonder if he could do the same for them.

With Bunga and Hamu enjoying themselves at the falls, the other mothers show up and ask Bunga if he can take care of their children as well. Bunga is excited about the increase in kids since it means the noise and splashes will also increase, and agrees.

Bunga is then left with Young Rhino, a Little Monkey, a Young Serval and Juhudi in addition to Hamu. When they ask him what to do, he replies that they should teke, ruka and teleza.

Meanwhile, over in the Outlands, Reirei's Pack are practicing their hunting skills. When satisfied with their work, Reirei praises her children and states that it's time to return to the Pride Lands.

Back at Hakuna Matata Falls, the kids are enjoying themselves so much that they fail to see the jackals sneaking up on them. They leap out of the bushes and approach the children. Bunga exclaims "Teke" to them, and the kids kick with all their strength, sending the jackals away.

Bunga then notices Goigoi about to pounce on the monkey. He calls "Teleza" to him, and the monkey slides on his belly across the grass. Goigoi tries the same but crashes into a pile of rocks.

While Bunga tries to defend himself against Reirei, he sees Hamu being chased down. He warns the zebra, but the zebra replies that he knows what to do. He leaps onto a teeter-totter rock and, when Dogo hops on the other end, he leaps off. Hamu cries "Ruka" to Young Rhino, who jumps onto Hamu's end of the rock, launching Dogo into the air. Hamu happily exclaims that it's how they do it in Hakuna Matata Falls.

Just then, Beshte, Fuli, Ono and Kion arrive. Kion asks if he and Hamu are okay, and Bunga proudly informs him that his brave kids managed to defeat the jackals. Hamu then adds that they're brave like Bunga. Fuli wonders where all the other kids came from, and Bunga is only able to assume that the word spread about how much of an "un-bungalievable" babysitter he is.

With Young Rhino sitting on her, Reirei calls to Kion and orders him to look at what the "horrible little kids" have done to them, asking for his help. Kion agrees to assist her, provided that she leaves the Pride Lands for good this time. She agrees, and the jackals leave, without looking back.

A little later, the parents come to pick up their kids. Bunga informs them of how they managed to fend for themselves against the jackals, and Hamu explains how Bunga taught them about Teke, Ruka, Teleza. Muhimu is impressed that Bunga taught them how to defend themselves and labels him as the best babysitter ever.

Soon, the kids have to return to their parents. They gather around Bunga and say their goodbyes. Fuli admits that Bunga is really good with kids. The honey badger shrugs, asking her to call him "Babysitter Bunga".

Differences From The Episode 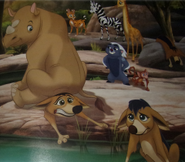 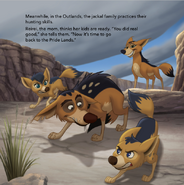 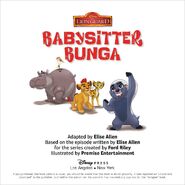 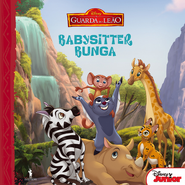 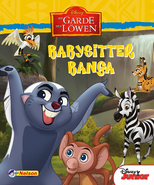 German cover (Babysitter Banga)
Add a photo to this gallery

Retrieved from "https://lionguard.fandom.com/wiki/Babysitter_Bunga_(book)?oldid=194303"
Community content is available under CC-BY-SA unless otherwise noted.