The Lion Guard Wiki
Register
Don't have an account?
Sign In
Advertisement
in: Groups, Pride Landers, Baboons,
and 4 more

Baby Baboon's Troop, also called the cliff baboons, is a group of baboons in The Lion Guard. They live in a cave at the top of Mapango Cliffs.

Fuli takes Baby Baboon to Nyani Grove, believing it to be his home. She is told that the baby belongs to the neighbors of Big Baboon's troop, who live in Mapango Cliffs. They ask her to send a message to the cliff baboons, but simply hurl baobabs at her.

Once Fuli reaches the cliffs, she returns Baby Baboon to his relieved mother. However, Mzingo and his vultures attack, causing the rest of the troop to emerge and fling fruit at the vultures as Fuli battles them from a ledge. She ensures that the vultures are driven away, and the troop chants her name in unison as they descend from the cliffs and surround her. Baby Baboon's mother thanks Fuli warmly, and Baby Baboon embraces her neck.

Baby Baboon's troop says goodbye Fuli and the rest of the lion guard. As they make their way to the Tree of Life.

Baby Baboon is the youngest known member of the troop. He is mischievous and playful, but is nevertheless skilled at fending off enemies. He is much smaller than the rest of the troop, with pale fur and large, round cyan eyes.

The following are known members of Baby Baboon's Troop who have not received an official name. 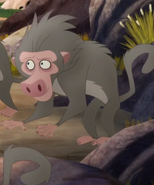 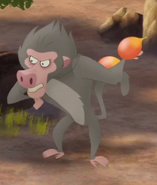