The Lion Guard Wiki
Register
Don't have an account?
Sign In
Advertisement
in: Featured, Merchandise, Board Games, Real Life

View source
watch 01:55
Cobra Kai Season 4 - The Loop
Do you like this video?
Play Sound

3D Snakes and Ladders[1] is a game inspired by The Lion Guard.

Players choose between Kion, Fuli, Bunga or Beshte/Ono, and throw dice to achieve the goal of getting to the top of the board. Pawprints leading up or down are used in place of the traditional snakes and ladders.

The Pride Lands are abuzz with excitement, because the race to the Pride Rock is about to begin! Move Kion and his friends all the way to the top and look out for the boulders that can help you climb up a level or send you sliding down again.[2]

Close-up of the game 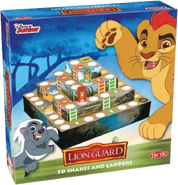